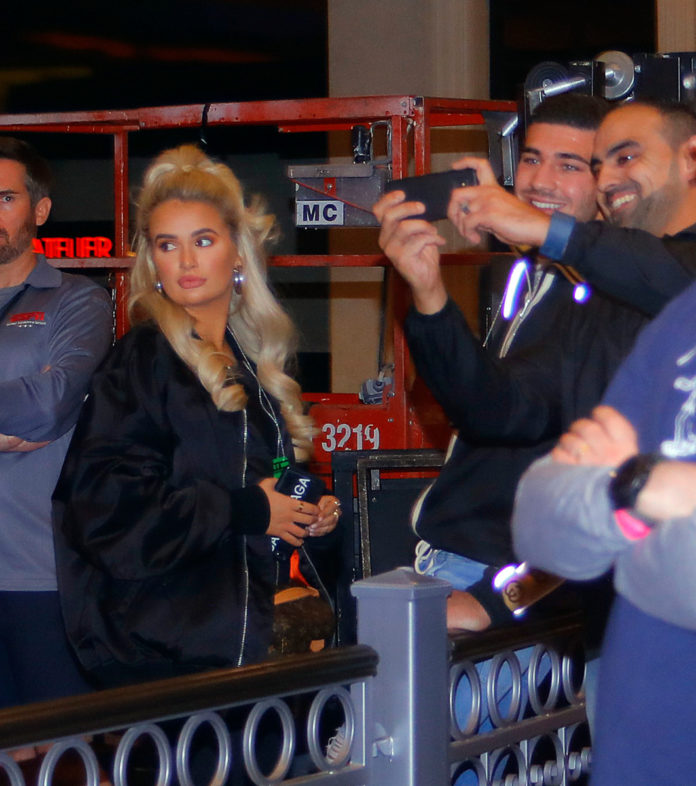 The couple greeted admirers backstage with Tommy, 21, posing for selfies as Molly-Mae, 20, chatted away to admirers.

Tyson’s press conference took place inside the MGM hotel, and the trio were quickly recognised by guests.

Adoring fans swarmed around Tommy, who took time to sign autographs after his brother was interviewed in Sin City.

Meanwhile, showman Tyson stole the show dressed in a jazzy suit with his face printed all over it.

Molly-Mae chatted away to excited fans

Tommy was mobbed, but took the time to greet guests

Las Vegas is set to host another exciting chapter in heavyweight history.

Tyson and Deontay Wilder will step into the ring once again as they face-off in Sin City for the WBC heavyweight title, just as they did fourteen months ago in LA.

That fightended in a dramatic drawafter twelve rounds of iconic sporting drama, including Fury’s dramatic late resurgence after Wilder knocked him to the canvas.

It is one of the most anticipated fights of the year and some way to kick off a packed 2020 and takes place next weekend on Saturday, February 22.

Tyson Fury was supported by his family in Las Vegas

Fury is the marginal favourite to dethrone knockout king Wilder, who is still without a pro defeat and has a fearsome record of 42-1-0.

The Bronze Bomber holds the belt and the winner of this bout will be on aunification collision course with Anthony Joshua.

With the eyes of the world on Vegas, both fighters will be looking to put on a show.

When you fly high people will throw stones at you. Dont looks down. Just fly higher so the stones wont reach you.

She shared photos on Instagram from Manchester airport and on the plane, writing an inspirational message to fans: “When you fly high people will throw stones at you. Dont looks down. Just fly higher so the stones wont reach you.”

Paris, 30, is the mother ofthe heavyweight champsfive children and they began dating when she was 15 and he was 17.

The clues Camilla Thurlow was expecting a baby with Jamie Jewitt months before revealing...