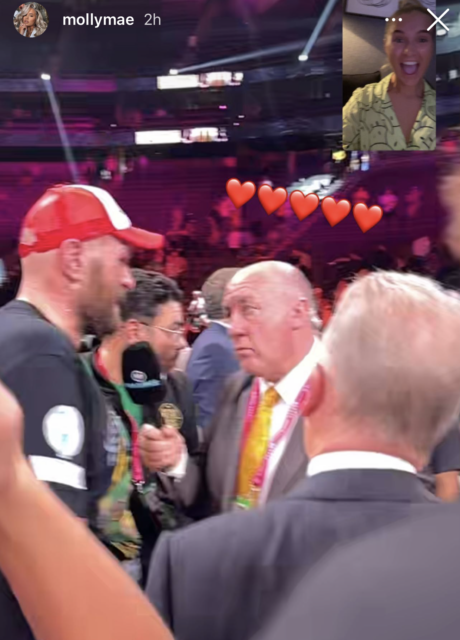 MOLLY-Mae Hague said she was “beyond happy” after Tyson Fury knocked out his nemesis – and her boyfriend Tommy video called her from the ring.

The Love Island star watched one of the greatest fights in the history of boxing from home while Tommy got a front row seat.

His brother Tyson shook off two Deontay Wilder knockdowns – and managed to put American Wilder down FIVE times in total.

“That’s a champion right there,” she wrote sharing a snap of Tyson after the fight.

“Not an inch of doubt from any of us.

She also shared a pic of her would-be sister-in-law, saying: “How stunning. A moment for Paris Fury.”

Not missing out on her boyfriend’s special family moment, Tommy FaceTimed her from the ring as he celebrated his success.

With his arm raised up in the air, Tommy grinned from ear to ear.

Fury’s position as the greatest heavyweight of this era was cemented for the ages.

He survived a terrifying fifth-round battering to KO his nemesis in round 11 in spectacular style on a wild Las Vegas night.

Wilder was battered down in the third and it looked like another early night for the American.

But the 35-year-old former WBC champion rallied incredibly to drop Fury twice in a magnificent fourth round.

Fury then combined skill with power to collapse Wilder again in round 10.

But when Fury scored the hat-trick in round 11 the game was over and he was secured the greatest big man of his era.

The victory is a massive boost for British boxing, after Anthony Joshua’s shock defeat to Aleksandr Usyk last month in London.

After the fight, a bruised Fury said: “Like the great John Wayne said I am made from pig iron and steel baby

“I was down a couple of times and hurt and Wilder is a tough man too after he got up a few times too.

“It was a great fight tonight, worthy of any trilogy in the sport, I always said I am the first best and he is second.

“But I went over to show love and respect and he didn’t want it to so I will pray for him.” The Love Island star was ‘beyond proud’ Deontay Wilder dropped in round four

Charlotte Crosbys shorts fall down flashing her pants as she competes in her first...

Josh Ritchie mortified as he’s caught lying about going to a strip club after...

One Love Island girl has already left the island after brutal first recoupling and...

Boris Johnson tells Macron he’s got ‘bigger fish to fry’ than trawlers as he...