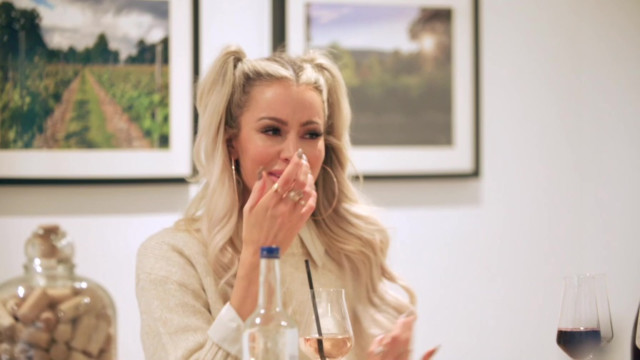 EMOTIONAL Olivia Attwood broke down in tears during a meal with fiancé Bradley’s mum after revealing she underwent surgery to remove a lump from her breast.

The Love Island star, 29, was overcome as she joined her mother-in-law to be for a meal to celebrate the blonde beauty joining the Dack family.

Olivia worried fans when she had mystery surgery before revealing to fans she’d had a secret cancer scare and was forced to have a non-cancerous lump removed from her breast.

In this exclusive clip from tomorrow’s night’s episode of Olivia Meets Her Match, the reality star gets choked up as she thanks Bradley’s mum for accepting her.

Wearing an oversized, cream jumper, Olivia breaks down in tears as Brad’s mum raises a glass to her.

Fighting back tears, Olivia admits: “It means a lot to me to be welcomed into your family. The blonde beauty was overcome with emotion Bradley’s mum raised a glass to her future daughter Olivia was blown a kiss by Bradley’s mum

“I’m being serious, it does. Throughout loads of periods of my life people haven’t got who I am. I can be misunderstood. It’s a lot. A lot of hair, a lot of boobs and I just love your son a lot.”

The heart-warming moment came after Olivia revealed to fans that it had been “a rough couple of weeks.”

She said: “I found a lump at the top of my right breast and it was quite hard and I could really feel it was quite near the surface.

“It’s causing me now quite a lot of pain and discomfort. The reality star said she’s been misunderstood during her life Bradley and Olivia are currently planning their wedding

“The chances are it’s going to be nothing, but it still sits a bit in the pit in your stomach.”

During the show Olivia meets with her surgeon to have an ultrasound scan, and is relieved when he tells her: “I’m confident that this isn’t breast cancer.”

She decides to have surgery to remove the lump anyway as a precaution.

“It’s just made me really sure now that I want it out,” she says. The lump thankfully ended up being non-cancerous

“I don’t want whatever that is in there that keeps growing at this rapid rate. I want it gone.”

Explaining her reason for showing the scare on her show, she said: “I’ve got an audience of girls from 13-25.

“If I could encourage them to be more in tune with their bodies and female health, then that is a good thing.”

Last month Olivia filmed her two feet while sitting in a hospital bed, provoking a flurry of responses from fans. Olivia recorded a video on her Instagram where she cleared up that she was okay, but didn’t go into what surgery she had.

The star said: “Guys, I’m okay. Don’t panic. I thought I discussed this on my Stories the other day, you guys clearly don’t listen to me.

“I just had a little procedure – well, not little, medium sized – that I’ve been putting for awhile. That’s been done, I’m okay, I’m out of surgery now.

“I’m not going to talk about it yet because I’ve had my crew with me today. Olivia assured her fans she was OK

“So you’ll see what’s happened and what I chose to do.

“And I’ll discuss it in more detail then when it all comes out. There’s no point talking about it twice. Just know that I’m okay and thank you for all the love.”

It was announced last in July that Olivia had bagged her own reality show, which is part of ITV’s 2020 autumn schedule.

The 29-year-old is known for her appearance on Love Island in 2017 when she finished in third place alongside Chris Hughes, although the pair broke up seven months after meeting

She is now featuring on The Only Way Is Essex and recently resumed filming after a break due to the coronavirus pandemic.

She took to Instagram to share the news and wrote: “Soooo this happened last night.. one of the happiest days of my life.”

Olivia made an explosive debut on Towie in August last year and was hailed by fans as the “saviour” of the show.

The star splits her time between Essex where the show is filmed, and Manchester, where Bradley lives while playing for Blackburn Rovers.

Dominic Cummings shouldn’t resign as he ‘didn’t break the rules or the law’, says...

Which fast food restaurants have reopened including McDonald’s and Nando’s?

Second lockdown: All the loopholes in the new laws as England plunged into fresh...