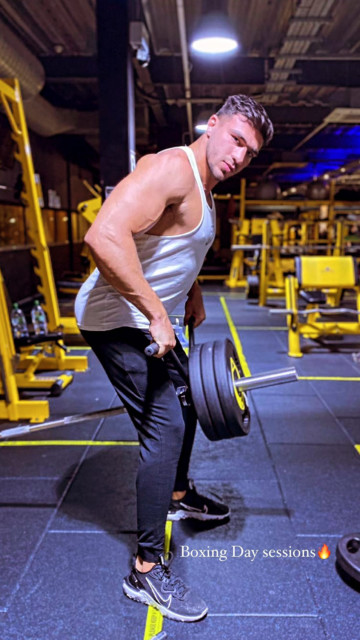 TOMMY Fury has angered fans by hitting the gym just two days after landing back in the UK from a tropical getaway to Dubai and the Maldives.

The boxer, 21, got a weights workout in on Boxing Day after spending a fortnight in Dubai and the Maldives with his Love Island girlfriend, Molly Mae Hague, also 21.

He wore a white tank top and black tracksuits as he dead lifted an impressive amount of weights.

Tommy looked side on to the camera as he worked out on his Instagram stories, calling the workout, “Boxing Day sessions”.

Some fans were angered that Tommy was out and about only days after arriving back to Manchester Airport, presuming he had to quarantine for 10 days as per government regulations.

But both the United Arab Emirates – of which Dubai is major city – and the Maldives are on the UK’s travel corridor list. Or indoors at many of the places they visited

That means Tommy and Molly-Mae do not need to self-isolate on their return to England.

The pair were still called out for not always not abiding by strict coronavirus guidelines.

Fans were left unimpressed after the couple filmed themselves on the plane for a 20-minute clip vlog and both had their masks pulled down past their chins.

As a member of the cabin crew walked past in PPE, Molly giggled and said: “So guys, we are now on the plane and we’re going to Dubai to join every mum, cat and their dog out there. I cannot wait.” With his surgical face mask pulled onto his chin, Tommy then sipped champagne before puckering his lips.

While clinking glasses, the couple grinned as a crew member said over the tannoy: “Wear your face masks throughout the flight.

“It is a legal requirement to protect yourself and all passengers on board the flight.”

The video continues with Molly and Tommy walking around their hotel grounds without face coverings and visiting their pals, Maura Higgins and Chris Taylor, at their hired apartment. They accused him of breaking self-isolation rules, but both countries are on the travel corridor list

The foursome are all laughing and joking in the same room without masks, before heading out for a meal.

Molly filmed another mask-less clip while showing off the view from inside the tallest building in the world – the Burj Khalifa.

Unlike the blonde star and Tommy, Maura and Chris are wearing their face coverings while inside the grand building. Towards the end of the vlog, Molly climbs into a cab with Tommy and they head off to Aqua Adventure at the Atlantis. Again, they aren’t wearing masks.

Commenting on the video, one fan raged: “Why they not wearing face masks? People in the background are wearing them. These are setting such bad examples.”

Another said: “Why do they not have their masks on on the plane? Or wear it under the nose ? Honestly so many ‘influencers’ do this, and it really bloody annoys me.”

Did you miss our previous article…
https://www.hellofaread.com/love-island/the-sexy-stars-getting-their-other-halves-hot-under-the-collar-with-lingerie-shoots-shirtless-snaps-spanx-undies/

Kyurem will enter Pokémon Go into the New Year

Love Island’s Michael Griffiths ‘is dating model Bethan Sowerby as they shower each other...

Hitman 3 free DLC is available now with a new location

Who were Prince Philip’s siblings?