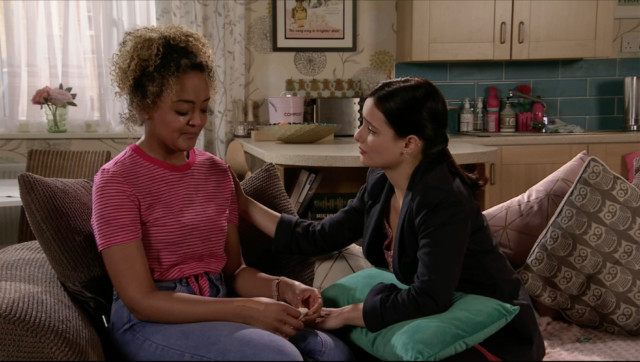 CORONATION Street viewers are convinced Emma Brooker and Alina Pop will embark on a steamy affair in a shock new plot twist.

Fans of the ITV soap will know the two have recently been caught in a love triangle after they both dated Seb Franklin.

Corrie fans are convinced Emma and Alina will get together

Emma – played by Alexandra Mardell – recently split with Seb as she was convinced he was still in love with his ex-girlfriend Alina.

During last night’s episode, the pair appeared to patch up their friendship after spending time together in their apartment.

Alina had planned to meet Seb for a drink later in the evening, but decided to stay with Emma following the news her half-brother Ollie had been diagnosed with a incurable form of mitochondrial disease.

Soon after making the decision, Alina rang Seb to cancel their date. Alina was there to comfort Emma The two have been caught in a love triangle with Seb The scenes left many fans speculating over their relationship, with one writing: “Emma and Alina would make a far better couple than either of them were with Seb js.”

A third tweeted: “Okay, let’s just forget about Seb, and get Emma & Alina together #coronationstreet.”

A fourth added: “Seriously tho Alina and Emma… should be a couple. I ship it.”

Corrie viewers will remember that Seb and Alina enjoyed a brief romance last summer after Alina was introduced as part of a modern slavery storyline.

But their relationship came to an end when Alina left Weatherfield .

Alina made an unexpected return to the cobbles in December looking for Seb but was disappointed when she found out he was in a relationship with Emma.

Emma then quickly dumped Seb when she realised he still had feelings for Alina.

Did you miss our previous article…
https://www.hellofaread.com/soap-opera/jessie-wallaces-suspension-from-eastenders-is-over-as-she-returns-to-set-as-kat-slater/

EastEnders fans go wild as Tracey admits to a one night stand with Phil...