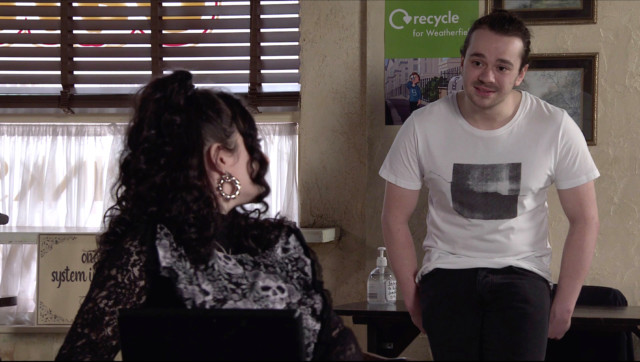 ABI Franklin asks her son Seb to give her away on her doomed wedding day to Kevin Webster next week in Coronation Street.

Abi will be forced to call off the wedding when Seb and Nina are left fighting for their lives in hospital after a horror attack.

Viewers will see Seb and Nina search online to find a suitable necklace for Abi on her wedding day.

When Seb makes a comment about buying her an engagement ring, Roy overhears and is concerned.

Seb is delighted when his mum asks her to give him away and presents her with the necklace.

Tragedy strikes later, however, when Nina and Seb head out for a romantic walk along the canal and bump into Corey and his gang.

Things escalate quickly as Eli encourages Kelly and she slaps Nina across the face.

As Seb and Nina try to get away, the gang launch an unprovoked attack and leave the youngsters fighting for their lives in hospital. Later, the police interrupt the Stag and Hen parties and break the devastating news that Nina and Seb have been attacked.

In the hospital, the nurse explains to Roy that Nina sustained several blows and is currently undergoing an operation.

Abi is horrified when she takes in the extent of Seb’s injuries and asks Kevin to cancel their wedding.

Abi tells Seb she loves him as he’s wheeled away for his scan.

Later, Nina regains consciousness and tells Roy and Abi that all she can remember is seeing Corey and his mates.

Abi rushes over to find Corey and, spotting him with Asha, confronts him about the attack but Corey insists he knew nothing about it.

Asha is perplexed when Corey tries to assure her he’s innocent – but that it would be best if she told the police he was with her all evening.

What will Asha do?

And will Nina and Seb be okay?