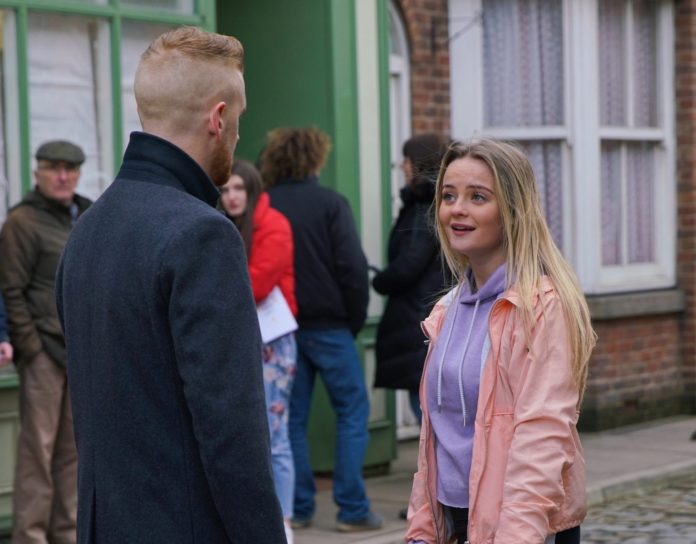 BILLY chucks Kelly out after discovering she leaked Asha’s naked video next week in Coronation Street – much to Gary’s horror.

Gary begs the vicar to give the teenager another chance – but risks his killer secret being exposed in the process.

Coronation Street fans know that villainous Gary thought he’d got away with the murder of loan shark Rick Neelan after convincing his daughter Kelly that the villain had done a runner.

Viewers also know that, to make it seem like Rick is still alive, Gary has been paying Kelly’s school fees.

But Gary was shocked out of his skin earlier this month when Kelly popped up on the cobbles wearing the local school Weatherfield High’s uniform. Gary then did some digging and realised that Kelly’s mum had been pocketing the money he’d been sending to pay her school fees.

Gary then threatened Kelly’s mum and she swiftly disappeared, abandoning her daughter.

When Kelly confided in Summer, the teenager begged her dad Billy to put a roof over Kelly’s head while she found her feet.

But little do Paul and Billy know that Kelly is to blame for Asha’s current nightmare after leaking her naked video. Dev rages at Kelly for leaking the naked video of Asha

Viewers were horrified when the cruel bully accessed the footage on Corey’s phone and shared it with a group chat.

The video eventually found its way onto the internet – much to Asha’s dismay.

Next week’s episodes of Coronation Street will see Gary jump to Kelly’s rescue when Dev blames her for Asha’s nightmare. Some lads point and laugh at Asha

Adam watches Gary get involved and grows suspicious of his motives.

It all kicks off on the cobbles when Nina notices a bunch of lads laughing at Asha and ends up punching one of them in the face.

Later, Paul discovers that Kelly was the one who leaked the naked video of Asha and put pressure on Billy to chuck her out of the flat. But when Gary gets wind of the situation he begs Billy and Paul to give Kelly another chance.

But Billy and Paul are suspicious as to why Gary is so invested in the video scandal. Nina notices the boys laughing and punches one in the face

Can he persuade them to keep Kelly under their roof without revealing his killer secret?

Corrie bosses are yet to confirm whether Kelly will take the plunge and expose Gary for the killer he is.

Actress Millie Gibson – who plays Kelly – tweeted that she’d be appearing in Corrie in March back in January.

And sources told HOAR Online at the time that the storyline involving her character Kelly and Gary would be huge.

Corbyn forced to deny plans to shut down MI5 as Boris attacks him over...

Who is Joe Swash? Dancing On Ice 2020 star who is in a relationship...

Boris Johnson promises to get on with solving the social care crisis but...