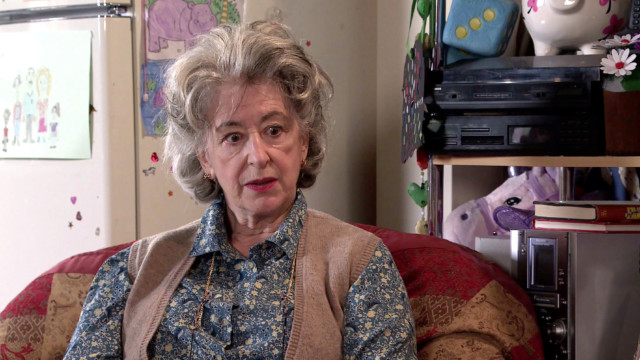 Evelyn threatened to sue Dev and Bernie for criminal negligence after slipping on some salad dressing in the shop.

Evelyn continues to force Bernie to run errands for her

Bernie was then forced to bite her tongue when Evelyn listed some chores for her to do to make up for the incident.

Next week, Evelyn continues to manipulate Bernie into running errands for her following her fall.

When Bernie drops Evelyn’s dog Cerberus home, however, she manages to expose her scam with a doggy treat.

Dev is in stitches when Bernie relays Evelyn’s reaction and tells Bernie he owes her a drink.

Later in the week, when Aadi pokes fun at Dev’s nonexistent love life, Bernie appears and pretends they’re off for a date.

As their pretend date comes to a close, Dev invites Bernie back to his. Dev and Bernie sleep together Dev tells Bernie not to expect a repeat performance

Dev puts his foot in it afterwards by telling Bernie she won’t be getting a repeat performance.

Aghast at his arrogance, Bernie tells Dev not to flatter himself.

Mary has a go at Bernie for taking advantage of Dev when she gets wind of what’s happened.

She has a change of heart when she overhears Dev laughing about Bernie with Steve, telling him he only went there because he’d had a few drinks.

Will Mary warn Bernie about what she’s heard?

Evelyn returned to the cobbles earlier this month as actress Maureen Lipman reprised her role in the soap following the tragic passing of her partner of 13 years, Guido Castro.

McDonald’s has 30% off EVERYTHING on its menu today

EastEnders fans go wild as they spot Jay from The Inbetweeners’ DAD as policeman...

Love Island is already looking for contestants for the SUMMER series and heres...