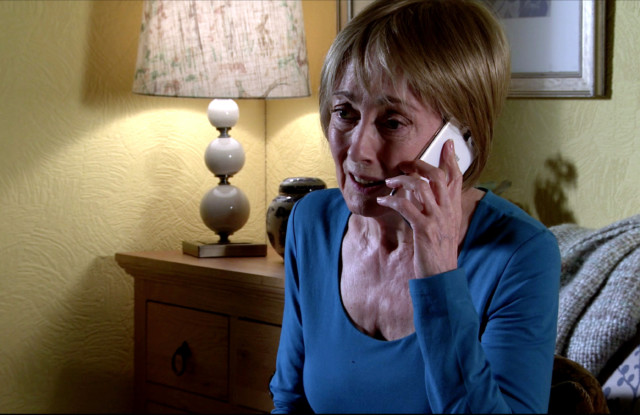 CORONATION Street villain Geoff Metcalfe is going to be horrified next week when his ex-wife Elaine exposes the truth about him.

The abusive husband – who is played by actor Ian Bartholomew in the ITV soap – has no idea his ex-wife has re-emerged.

There was another woman he abused but they only dated – and so Elaine’s arrival is set to send Geoff into a tailspin.

Viewers saw Elaine visit Yasmeen in prison last night and vow to help her get out and free her of Geoff’s control once and for all.

Later this week Yasmeen will suffer a heart attack on the day of her trial and be sent to hospital. With her trial postponed Yasmeen is left to recover and on the cobbles Elaine is sad to hear about what’s happened.

And when she’s told how TIm believes his dad, Elaine is troubled.

Elaine calls Alya and confirms that she’s prepared to give evidence against Geoff and do everything she can to help Yasmeen. Alya’s overcome with gratitude.

However Elaine’s presence on the street terrifies Geoff and he manipulates Tim into believing him when he says the woman is lying.

Tim even goes as far as to say he will have Elaine arrested if he sees her again, leaving Geoff relieved.

But when Tim tells Sally about the woman, she questions Geoff’s story.

Will Elaine get justice for herself and bring Geoff down?

Did you miss our previous article…
https://www.hellofaread.com/soap-opera/emmerdale-fans-cry-tears-of-relief-as-lydia-breaks-down-and-finally-agrees-to-take-huntingtons-test/

Price of burgers to plummet by a THIRD under new trade deal with New...