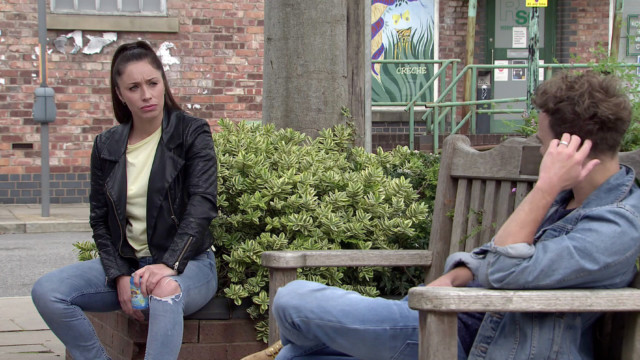 DAVID Platt puts Lily Platt’s life in danger next week in Coronation Street when he leaves her with an unstable Shona Platt.

Shona – who is played by Julia Goulding on the ITV soap – has been left with memory loss after getting caught in the firing line during last year’s horrific Christmas shooting.

David puts Lily in danger when he leaves her with Shona

Corrie fans were horrified when the full extent of Shona’s memory loss became clear last month as viewers saw her speak to her key worker, Alice, about returning home from the facility she’d been living in.

Having forgotten that her son Clayton was in prison for kidnapping her and stabbing Kylie Platt, she insisted on going back to live with him and refused to live with David.

Things were looking pretty bleak for David when Shona moved in with Roy and tried to kiss her care worker, Aaron, in front of her husband. But Shona started to warm to David again after he took her on a date to the chippy.

Next week’s episodes of Coronation Street will see Shona spend the day with David in the salon.

But when Shona’s presence causes a problem with the customers, David has to bite his tongue. Later, David leaves Shona in Victoria Garden with Lily while he goes to buy ice lollies for the kids.

But things quickly take a dangerous turn and David is forced to ring Roy and ask him to collect Shona.

Roy later confides in Sarah that Shona will never get back to how she was before the shooting incident. A huge sinkhole appears in the middle of the garden

Later in the week, Nina tells David that Shona is planning to leave because she’s convinced herself he dislikes her.

David arranges a BBQ and invites Shona and Nina to join him, Sarah, Sally and Lily.

But David’s plans to woo Shona are destroyed when everyone is distracted by a huge crash.

The guests are stunned to see that a huge crater has appeared in the middle of the garden.

Everyone is left reeling from the shock.

Later, an engineer from the water company surveys the hole and breaks the news to David that as a result of the sinkhole, the house is unstable and he’ll have to live elsewhere.

Shona is excited when Ray offers to house them all at one of his hotels.

Angela Merkel admits we ‘deserved it’ after England’s Germany thumping – as Boris jokes...