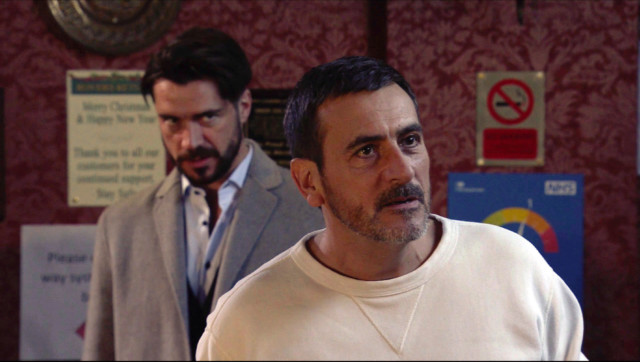 PETER Barlow gets the wrong end of the stick and accuses brother Daniel of sleeping with Carla Connor next week in Coronation Street as he turns to booze again.

Peter’s paranoia comes after Carla slept with Adam Barlow behind his back.

Carla did come clean to Peter about her one-night stand but failed to mention that the mystery man was actually his nephew.

Next week’s episodes of Coronation Street will see Adam and Carla go to great lengths to keep their secret from Peter.

Peter apologises to Carla for his paranoia and suggests they wipe the slate clean, getting down on one knee and proposing. Peter drinks in front of Carla

Meanwhile, Peter’s brother Daniel discovers that Carla slept with Adam, and heads over to confront Adam for betraying Peter.

Later in the week, Peter prepares for the wedding but he’s unsettled when Jenny mentions she saw Carla at Daniel’s flat.

Peter’s suspicions grow further when he sees Carla and Daniel whispering later in the Rovers. Carla tries to get Peter to stop

Seeing red, Peter accuses them of having an affair.

How will Carla worm her way out of this one?

Later, Carla panics when she realises Peter has disappeared.

She’s relieved when he returns, but dismayed when he downs alcohol in front of her as she tries to get through to him.

Peter was told he’s one drink from death by doctors last month in the soap after he relapsed following a horrifying carjacking.

Will Carla be able to stop him from drinking before it’s too late?

Did you miss our previous article…
https://www.hellofaread.com/soap-opera/im-a-celebritys-jessica-plummer-and-russell-watson-booted-out-in-shock-double-vote-leaving-fans-devastated/

Rishi Sunak WON’T quit and crown Liz Truss PM despite languishing behind her in...