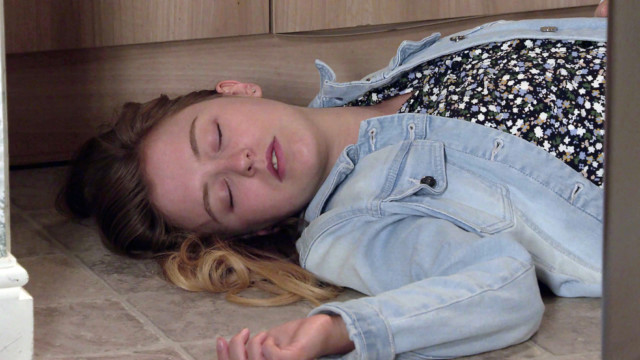 Summer Spellman collapses after drinking alcohol next week in Coronation Street – but is saved by an unlikely hero.

The 16-year-old’s life changed dramatically last month when she was diagnosed with type 1 diabetes.

Next week, Billy tell Mary that he and Todd have booked their wedding for 5 weeks’ time.

Meanwhile, Summer tells Will that Todd gave Billy £1000 towards the halfway house, and Will realises that Todd ripped him off.

Will decided to drop Todd in it and tells Summer everything about his dodgy schemes.

Meanwhile, Will sends a video to Paul and, as the locals gather in Victoria Garden for the calendar launch party, Paul swaps the laptop for his own.

Emma introduces the film and presses play but, to Todd’s horror, he realises it’s a video of him telling Will how he split up Billy and Paul.

Furious, Billy storms off, before reporting Todd to the police.

On the street, Billy, Paul and Summer watch on as Todd is led away for theft.

Later in the week, Summer and Aadi meet in Victoria Garden and end up boozing.

Summer assures Aadi that one bottle of cider won’t upset her blood sugar, but ends up going home feeling unwell.

Todd kicks the door in and is horrified to find Summer unconscious on the kitchen floor.

Has he found her in time?

Todd hired a teenager called Will to pretend to be an abuse victim and split up Billy and Paul.

Things got messy, however, when Will returned and threatened to expose Todd’s lies to Billy, forcing him to steal a heat pump that Billy’s church had paid for in order to pay off Will.

When Todd tried to pay Will off, the teenager secretly recorded him bragging about the theft as well as his success in splitting Billy and Paul up. Todd is arrested on suspicion of theft

Did you miss our previous article…
https://www.hellofaread.com/soap-opera/emmerdale-spoilers-april-windsor-breaks-down-as-shes-tormented-by-trolls-using-her-dead-mum-donna/

America’s Got Talent judge Heidi Klum breaks down in tears while listening to wrongly-incarcerated...

Jacqueline Jossa fans accuse Dan Osborne of sticking with his wife for money after...