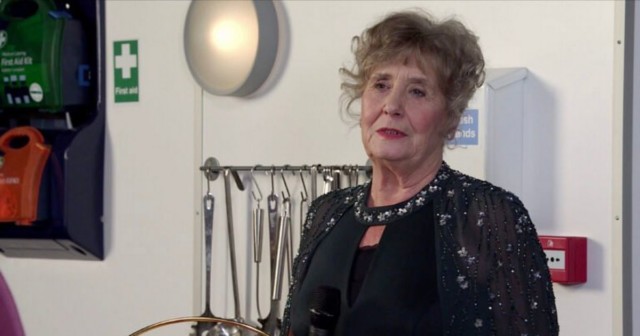 Mimi is set to disrupt Fiz and Phill’s impending wedding as she makes an explosive return in the coming weeks.

An insider said: “Mimi’s return will really set the cat among the pigeons and put a spanner in the works on Fiz’s big day. Who knows if the wedding will end up going ahead or not?”

TV and stage actress Margot first appeared on Corrie for a short stint last year when she signed up to play Mimi – the outspoken and snobbish mum of Fiz’s partner Phill Whittaker.

The character soon made an impact on the residents of Weatherfield as she made her opinions on the Street known.

Mimi was then forced out of town after she publicly humiliated Fiz during a meal at the Bistro. But Mimi is set to head back to the cobbles after the actress was spotted heading out with on screen son Jamie Kenna (Phill), Jennie McAlpine (Fiz Stape), Dame Maureen Lipman (Evelyn Plummer) and Bill Fellows (Stu Carpenter) after a busy day of filming on Thursday evening.

The group were out dining at Manchester’s swanky Alchemist bar – which is just yards away from the soap’s set at Media City.

In a snap uploaded to Jamie’s Insta, Margot can be seen joining in the party as the group joke and pose for snaps.

Fans were quick to comment on how happy they were to see the gang out together.

And a fourth gushed: “Hope you all had a great night.”

Away from Corrie, Margot is an actress known for her work on both stage and screen.

She appeared in King Charles III (2014) as Camilla, and was nominated for an Olivier Award for Best Actress in 1995 for Broken Glass. Slimmer than ever Martine McCutcheon, 46, stuns in skinny cropped jeans On the box she is best known for the TV shows Families, The Take, and Five Days.

Margot is married to the director David Thacker. Jacqueline Jossa says being back with her family is better than winning Im A...

When is the MasterChef 2021 final on TV?

Coronation Street: Daniels shock arrest explained Peter and Carla fight to save the...