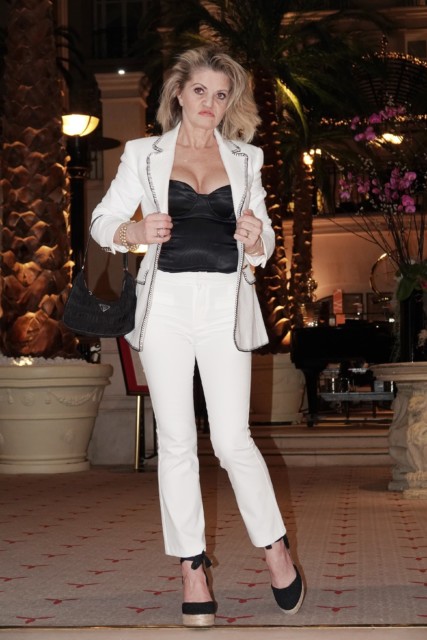 DANNIELLA Westbrook glammed up in a stylish white trouser suit as she stepped out for the night in London.

The troubled star looked markedly different from her trip to Pentonville prison hours earlier, as she visited her mystery boyfriend in the nick. She paired the white blazer with matching skinny trousers and a black corset style top with showed off her ample cleavage.

The outfit was finished off with black espadrille wedge heels and a small handbag in the same shade.

Her blonde locks were blow-dried straight for the occasion and she sported a hint of pink lipstick. Inside the hotel, Danniella playfully sat on a mantelpiece and took a call on a old fashioned phone.

She was then snapped in the lobby of the luxury hotel as she walked down a grand staircase.

Danniella was seen chatting on the phone outside the building in a cream oversized Lakers jumper and denim jeans.

She completed the look with a pair of white trainers and a matching Lakers cap.

Earlier this month Danniella revealed her new boyfriend is behind bars after she was linked to former Towie star Grace Andrew’s dad Terry.

The addict recently revealed she is training to be a therapist and embarking on holistic practices such as yoga and sound baths.

She hopes to work with other addicts to show them a path to recovery.

She told Paul Danan on his podcast The Morning After that her new gig gives her ‘a better buzz than any drug’. Earlier in the day, Danniella visited her mystery man in jail What’s in the Fortnite item shop today? Dread Fate, along with emotes and more...

Inside the Queen’s last days at Balmoral – where she was ‘happy & bright’...