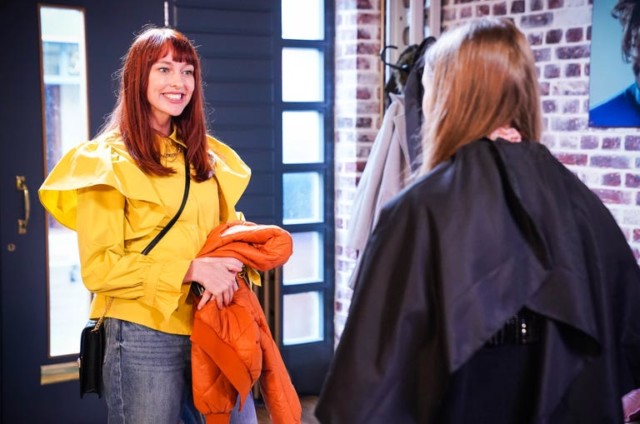 The actress, who plays Frankie’s old university pal Clara, will make her debut in Walford next week.

And if her heritage is anything to go by, she’ll be a very a good addition indeed.

Her great aunt is the double Golden Globe winning actress Dame Joan Plowright and her granddad David Plowright was the managing director of Granada TV – often working on Coronation Street in the Sixties and Seventies. The icon is best known for his Oscar-winning performance as Hamlet in 1948 which he also directed.

He was nominated for the Best Actor gong another seven times for roles in classic works including Wuthering Heights, Rebecca and Othello.

His decorated career also saw him pick up Baftas, Emmys and Golden Globes.

Sir Laurence married his third wife, Dame Joan, in 1961 and they remained together until his death in 1989, aged 82.

Joan, 92, is a legend in her own right having appeared in Enchanted April, which earned her an Oscar nomination in 1992, and Disney favourite 101 Dalmatians.

Emily is only at the start of her acting career has no shortage of inspiration to draw from.

Her arrival in the Square will put pressure on Frankie (Rose Ayling-Ellis) who begins to lie about her career in order to appear more successful.

But will the lie end up backfiring after she’s invited to an exhibition at a community centre? The actress will be introduced as Frankie’s friend Clara

1 in 5 beauty salons could go under unless Boris Johnson allows them to...