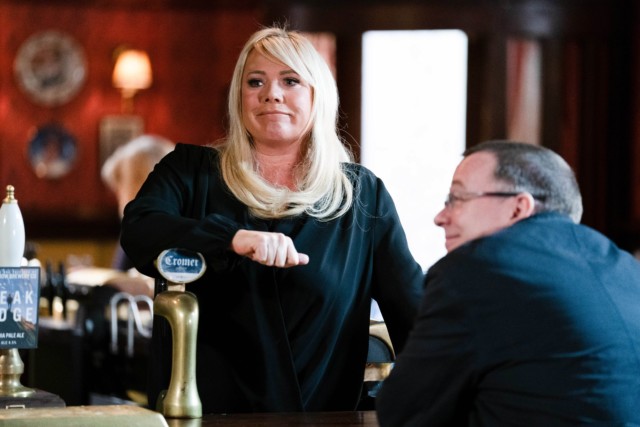 EASTENDERS’ Adam Woodyatt and Letitia Dean were once ‘ordered off set and sent home’ after getting the giggles during a day of strict filming.

The two stars opened up about their incredible TV history with the soap, revealing there was no place for ‘egos’.

Letitia and Adam – aka Sharon and Ian – have been

Speaking to Stacey Dooley on EastEnders: Secrets From The Square, the pair revealed all about the awkward moment.

Adam, who has played Ian Beale since the soap began in 1985, told Stacey about the incident.

He said: “A combination of Tish, Sue [Tully, who played Michelle Fowler], me and Paul Medford, we got sent home one Friday afternoon, and got told to come back the following day, because we just got the giggles.

“We got properly, properly told off and sent home.” Stacey Dooley is presenting EastEnders: Secrets from the Square Stacey interviews guests from different areas of the set

Letitia, who also joined the soap in 1985 playing Sharon agreed, saying: “It was very strict.

“We weren’t allowed to have any egos as kids.”

The cult BBC One soap is currently off air for the first time in 35 years after it ran out of episodes when production stopped due to the coronavirus pandemic.

Fans were devastated when EastEnders went off air – especially as it ended with some whopping cliffhangers on June 16. Letitia revealed she and Adam had once been sent off set Adam has been in the soap since it began in 1985

EastEnders actress Tanya Franks has revealed that the soap will return to filming in the week starting June 29.

The star – who plays Rainie Branning on the soap – broke the news in a tweet.

Writing on Twitter, Tanya said: “Looking forward to working with this geezer @RickyChamp1 again next week and getting Rainie and Stuart back to some #Stainie action.  #EastEnders.”

The soap was forced to halt production back in March due to the coronavirus pandemic, with the number of weekly episodes slashed in an effort to keep the show on air for as long as possible.

Dancing on Ice 2020 champion revealed as Joe Swash after surprise win against Diversity’s...

Fan claims GTA 6 ‘will be set in Rio’ after leak appears to reveal...