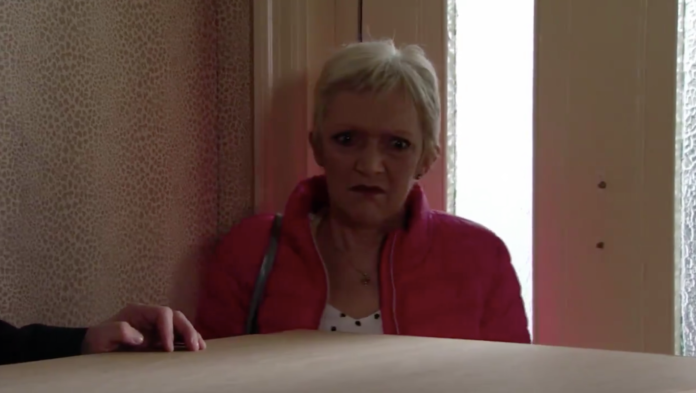 EASTENDERS fans are fearing for Jean Slater’s mental health after she thought Daniel had returned from the dead.

The cleaner – who is played by actress Gillian Wright in the BBC soap – panicked when she received a posthumous present from Daniel in the form of a giant box.

Jean was horrified thinking Daniel was back again

As Stuart and Big Mo dragged the huge box inside and told Jean it was from Daniel, she misunderstood and immediately thought he had faked his death again.

But after it was explained to her that it was a present from Daniel and not the man himself, Jean calmed down.

Instead there was a piano in the box with a note telling Jean: “Enough moping. Silence is not golden. Be more Jean.” She thought Daniel was in the box

Later when Tommy began playing the piano, Jean again thought Daniel had returned and was playing it for her.

However with Jean having stopped taking her bipolar medication after her run in with Suki Panesar, Jean has been behaving more and more erratically.

And her thinking Daniel was still alive was another consequence of that.

It’s left fans fearing for Jean’s mental health as she copes with her illness without the medication that keeps her stable.

A second said: “Did jean just ask if Daniel was playing the piano? Daniel. Who is dead. #eastenders”

Experienced workers can be a valuable asset — here are our top tips for...

EastEnders Martin Fowler waves round a gun during violent confrontation with Linda Carter in...