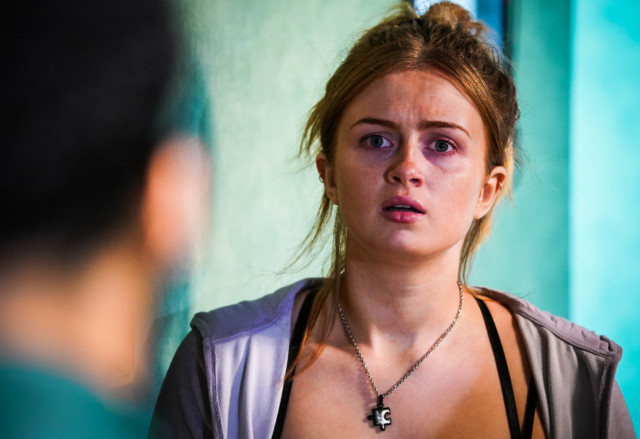 Viewers were particularly irked as Maisie Smith‘s character put pen to paper to allow for another shot a relationship with “vile racist” Aaron Monroe.

EastEnders’ Tiffany Butcher left fans fuming after signing divorce papers to end her marriage to KeeganIt came as her spouse, played by Zack Morris, lay battered and bruised in the medical ward

In Friday’s EastEnders episode, Keegan (played by Zack Morris) was left with a collapsed lung after being beaten up by Aaron (Charlie Wernham) far-right pals.

The episode began with his mum Karen Butcher (Lorraine Stanley) finding out that the reason Keegan got battered was that his ex Tiffany (Maise Smith) shared a far-right petition online.

Before Keegan was beaten up, he entered a verbal altercation with Tiffany’s new boyfriend and friends over the petition.

On the way home from the Queen Vic some of the lads beat him with baseball bats. Keegan now needs surgery for his lung – and it looks like he may need a doner.

Tiffany is shocked to hear the news but believes Aaron when he says he and his pals have nothing to do with it.

Yet after Keegan’s mum confronts her at the hospital, where Tiff confessed her love for Keegan, the upset character appeared to have a change of heart and returned home to sign the papers before agreeing to give Aaron another chance.

The far right gang member presented her with some flowers in an attempt to seal the deal.

Fans were outraged at the hugely emotional scenes, with one writing: “I actually cannot believe that Tiffany is still going through with this divorce and wanting to move on even after Aaron has shown off his true colours in his purest form.

“In a way I feel for Tiffany because she’s so vulnerable yet so naive as well.”

Another bluntly posted: “So Tiffany signs the divorce papers , so she can move to that vile racist Aaron #EastEnders.”

One then put: “Absolutely fuming Tiff signed the divorce papers #EastEnders,” as a BBC fan commented: “Well Tiff just spent time at Keegan’s bedside confessing her love, then she gets home and signs the divorce papers. Biggest flip flop in soap history.”

Another tried to see the positive side as they added: “At least the divorce will bring an end to that absurd Butcher-Baker name!”

Meanwhile Aaron, who is rumoured to be behind a terrorist attack at Christmas, doesn’t appear to be going anywhere soon.

His decision to terminate their marriage was cemented when he overheard Tiffany listening to one of Aaron’s racist rants.

In the vile chat, Aaron had taken issue with Bobby and Dana’s decision to raise money for the mosque, and what he calls the ‘woke brigade’ cancelling the nativity.

Back in October 2019 soap fans will remember how Tiff and Keegan stunned their families when they announced their decision to get hitched.

Yet things haven’t gone smoothly and the pair, while legally married, are now dating other people.

Soap fans have expressed their fears as Tiffany’s new love Aaron has shown his violent side – and their could be more to come.

The beautician gave City boy Aaron another chance after he ditched her on their disastrous first date.

But with the news that Tiffany actress Maisie is leaving the soap, fans are terrified the character is in danger.

They are even worried she will die.

One wrote: “Seems there is something really dodgy about Aaron ain’t there? Tiffany best stay away. #EastEnders”

Another added: “Does Aaron have a secret girlfriend. Always walking out on Tiffany when his phone goes and he won’t tell her who it is. #EastEnders.” Fans said they felt ‘sorry’ for Tiffany, pictured with her husband of two years, as she was being hoodwinked by Aaron

What time does Wetherspoons breakfast start and finish?

From apprenticeships to clearing, all your options if your A-level and GCSE grades are...

Boris Johnson admits he is ‘not 100%’ confident Britain will have a coronavirus vaccine...