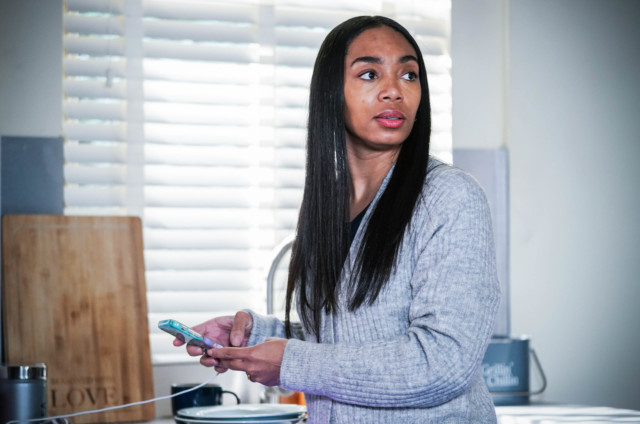 On Monday night the businessman confronted the evil lawyer about killing his wife Chantelle Atkins back in September 2020.

For months Kheerat and Whitney Dean have been trying to out Gray for his murderous ways.

Last night things took a turn for the worse when the Kheerat tried to get him to own up to murdering Chantelle, who he had fallen in love with.

The serial killer, who has already murdered Chantelle, Tina Carter and Kush Kazemi, went on to attack Kheerat.

Kheerat hit him over the head with a vodka bottle to stop him from straggling him.

But the end of the episode was left on a huge cliffhanger as viewers had no clue if Gray was still alive.

Tonight Gray’s fiancee Chelsea returned home to find Gray unconscious on the floor with Kheerat looking over at him in shock.

Kheerat told her: “He just came at me… He went mad! He told me the same thing Whitney told you, but it was just a game, just to get me back.”

Chelsea shouted back: “Have you called for help?!”

The beautician dialled 999 for an ambulance as Kheerat tried to tell her that he’s finally admitted all the awful things that he has done.

Kheerat desperately tried to explain: “I didn’t attack him! Not like that.”

She then told the person on the other line that it was Kheerat who had hurt him.

The businessman got his things and ran out of the house before the police could get him.

One wrote: “Chelsea ah damn fool!” while another fumed: “Ffs Chelsea!! Ya grass!”

A second said: “Me when Chelsea Snitched on Kheerat !! suddenly she doesn’t care about getting away from gray now.” Will the police find Kheerat?

Queen Elizabeth news – Prince Harry ‘felt erased’ after being left out of Monarch’s...

How old is Colin Jackson and who is his Dancing On Ice partner?

Priti Patel will accuse Facebook of trying to ‘blind itself’ to sick child abuse...