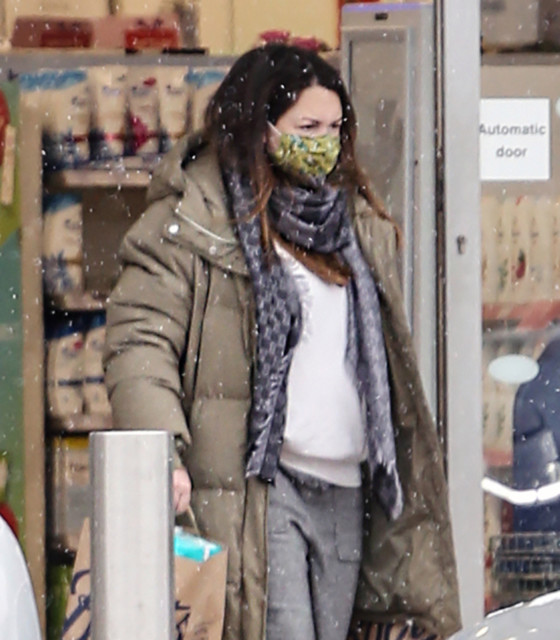 EASTENDERS star Lacey Turner has been pictured for the first time since giving birth to her second child.

After welcoming her new addition, the 32-year-old was pictured today in London visiting her local Boots to buy essentials in the snow.

The BBC actress wrapped out for brief outing in a cosy dark beige padded jacket, which she layered over a loose-fitting white jumper and grey joggers.

Battling the snow, Lacey was spotted putting her hood over her head while she carried a basket of goods after later visiting a supermarket towards her car.

The new mother-of-two completed her look with a navy printed scarf and a face mask.

The EastEnders star visited the shops for some essentials She and husband Matt Kay told OK!: “Matt and I are so completely besotted with our early surprise and Dusty is so in love with her new baby brother!

The happy couple announced the pregnancy back in September, calling it a “miracle”. Stacey Fowler is popular with viewers

Lacey said at the time: “We feel so lucky to be expecting our second baby, as it took so long to get Dusty.”

The star had two heartbreaking miscarriages before conceiving her daughter Dusty, who was born in July 2019.

“It took so long with Dusty,” said Lacey. “But now they’re coming along like buses! After the heartbreak we went through, it’s a miracle to fall pregnant so quickly.”

Stacey, who plays Stacey Fowler in the BBC soap, is now having a break from EastEnders to raise her newborn.

She returned to the show back in June after a year away following her first pregnancy.

Viewers watched as she immediately made a beeline for her ex Martin.

Queen’s pal trampled by cows saved from death by a can of cider in...