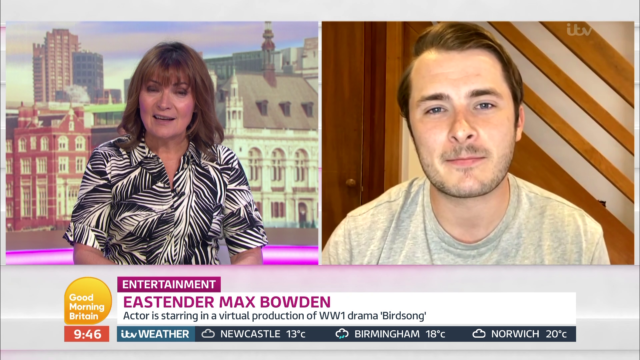 EASTENDERS star Max Bowden has revealed Ben Mitchell’s woes are far from over as he returned to filming this week.

Ben has been struggling with his hearing since the Thames boat tragedy and collapsed after suffering from a fever.

However, it quickly emerged that Phil, who planned to steal money to buy the Queen Vic for Sharon, was being set up by Danny.

The gangster then fired a gun next to Ben’s working ear – leaving him in agony and totally deaf.

Actor Max chatted to Lorraine Kelly on Good Morning Britain today and said he hopes Ben’s fortunes turn around – but it won’t be anytime soon. He said: “He’s not had an easy ride since the 35th anniversary, I think Ben’s head’s all over the place.

“And now to encompass that with a three month lockdown, he’s certainly going to be in a worse for wear state so I am hoping for more positives with Ben.”

EastEnders returned to filming after being forced shut down in March due to the coronavirus.

Actors finally returned to work last week and were spotted back in the studio in pictures obtained by Sun Online. Today, GMB viewers saw Max and Callum actor Tony Clay keeping their distance in a scene as they sat separately on the spacious set.

The cameramen have also been using extended equipment, allowing them to remain far away from the stars while shooting goes on.

Max spoke about heading back to the studio during the pandemic and said: “It was definitely daunting (going back), I felt a but rusty.

“But I felt safer there than I did going to the supermarket which is such a testament to what they’ve managed to do.” Emmerdale was the first soap to resume filming after lockdown rules loosened, with the cast returning at the end of May.

Meanwhile, Max has urged viewers to support theatres and the arts and said it was a “dangerous’ time for the industry.

He will star in a virtual theatre production of Sebastian Faulks’ Birdsong this month with fellow soap actor Christopher Harper from Coronation Street, with ticket sales raising money for The Royal British Legion.

Coronation Street spoilers: Kevin Webster devastated as Debbie tells him Abi is having an...

Inside Maura Higgins’ 30th birthday as she reunites with Love Island co-stars in Dubai...