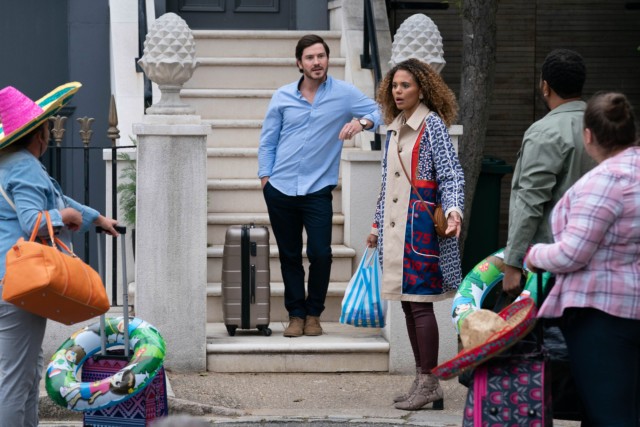 GRAY Atkins will brutally murder Chantelle next week in EastEnders as the soap’s harrowing domestic abuse storyline comes to a tragic end.

The long-suffering wife – who is played by Jessica Plummer – has been enduring harrowing mental and physical abuse at the hands of her violent husband for months on the BBC One soap.

Gray is suspicious when Chantelle plans a family holiday without him

In terrifying scenes this week, Chantelle was forced to beg for her life after Gray discovered evidence she was planning on leaving him when an advert popped up on his laptop.

Gray stormed in while Chantelle was in the bath and told her she had “two minutes” to save their marriage.

He then forced her to lower her head under the water – while he watched over and timed her as she struggled to breathe. Chantelle rings Kheerat and tells him she won’t be returning Gray keeps the kids at home with him

Next week’s episodes of EastEnders will see Chantelle plan her escape – and pack her suitcase under the pretence that she’s going on a family holiday.

When Gray opens the door to the Taylor family dressed for a holiday and learns about their trip, he’s furious Chantelle didn’t think to mention it.

Later, Chantelle visits Kheerat and tells him about her plans to never return.

Meanwhile, Gray grows suspicious that the holiday is actually an escape plan, and convinces her parents that the kids should stay at home with him.

When a defeated Chantelle retreats to a cafe during their holiday, Mitch notices something is up with his daughter and follows her. But Chantelle doesn’t open up and insists she’s just missing Mia and Mack.

Mitch does his best to fix things and heads back to Walford to fetch them.

Chantelle is overjoyed when she realises her escape plan might work after all, but devastated when she learns that Gray has accompanied Mitch on his return.

To make matters worse, Gray doesn’t wait long to insist that he, Chantelle and the kids go back to Walford.

As they leave, Mitch detects a flicker of fear on Chantelle’s face but keeps shtum.

When Chantelle and Gray arrive back in Walford, a delirious Chantelle eventually blurts out that she’s leaving him.

How will the brute react?

EastEnders have revealed that, after bravely attempting to escape from Gray, Chantelle will be killed by her abuser.

Speaking about why Chantelle decides to escape to a women’s refuge rather than confiding in her family, actress Jessica Plummer said: “Chantelle’s parents have a  relationship with her husband, so for her to tell her parents is to potentially not escape. Gray is clever, he’s smart and he’s not going to let her just walk out of the door. I think it’s easier for her to just run.”

Talking about the tragic end to the harrowing storyline, Toby Alexander-Smith – who plays Gray – said: “It’s certainly going to be a shock for the audience and I think that it is important that it concludes in such a tragic way.