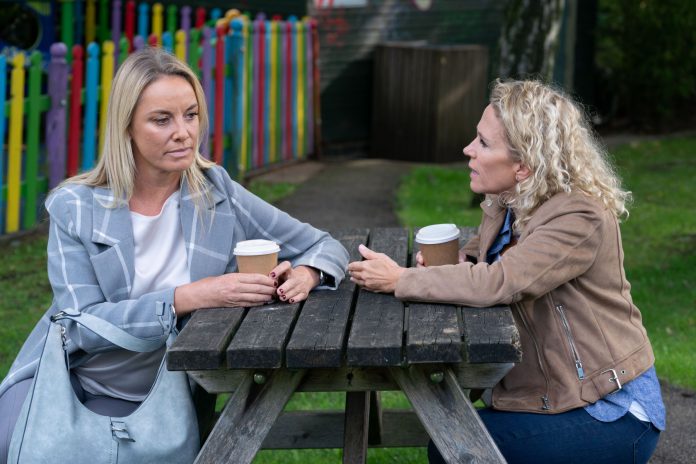 As the week kicks off Lisa, whos played by Lucy Benjamin in the BBC soap, will be seen becoming tired of Mel interfering with her pregnant daughter, Louise.

Worried about her friends behaviour, Lisa tries to encourage Mel to see a counsellor about her grief.

But even though Mel (Tamzin Outhwaite) agrees that this would be a good idea, Lisa soon discovers she has no intention of taking her advice.

Lisa isnt the only one getting frustrated by Mels interfering. Louises boyfriend, Keanu Taylor, soon vents to Lisa about Mel.

After a false alarm with the baby, Lisa sees first hand how overbearing Mel is.

Meanwhile, with Sharon onto her, Mels plan begins to unravel and she goes to desperate lengths, lying to those around her, to ensure she gets what she wants. What will Lisa do?

Mel is currently planning to leave Walford for Portugal, along with Lisa, Louise and Keanu.

But, while Louise is on board with a new life in the sun, Keanu is becoming more certain that he doesnt want to leave.

He even pleads with Sharon to stop Louise from going to Portugal, but she warns him to play along with Mel.

Actress Tamzin announced in the summer that she would be bowing out of the soap for a second time.

The actress, 48, announced she was quitting the show in July and new images appear to suggest she’ll die in an explosive road accident.

Shots taken on location show Mel being chased by Sharon Mitchell (Letitia Dean) as she attempts to flee Walford.

Mel has been blackmailing her old friend after catching her in the act with toy boy Keanu Taylor.

Putting two and two together, the businesswoman then guesses that Sharon is actually pregnant with the youngster instead of hardman hubby Phil Mitchell.

Mel then uses the info to get Sharon doing her bidding for her – starting with convincing step-daughter Louise – who is also pregnant with Keanu’s baby – to move in with mum Lisa Fowler.

But it seems Mel’s twisted ways come back to bite her when she’s caught in a car crash.

When Sharon finally catches up her, a van seems to get to Mel first and sends her car spiralling into the air.

The vehicle dangerously lands on its roof and emergency services quickly arrive at the scene – but is it too late?

I dropped out of school but become a millionaire at 20 after being told...

The Queen was always determined to keep calm and carry on and managed it...

Is Louises baby okay in EastEnders? BBC bosses have confirmed she will go into...

Love Island fans turn on Sophie Piper after she lied to Connaghs face about...