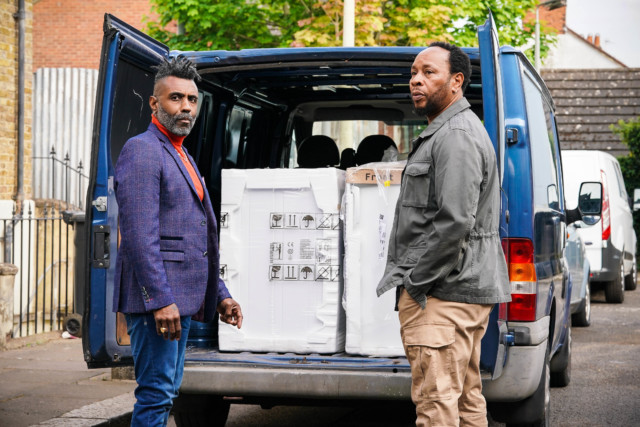 ANOTHER member of the Baker family will be causing a stir in Albert Square next week.

Mitch Baker gets a surprise when his older brother Avery makes his first appearance in EastEnders. He immediately causes a stir in the Square

After Gray Atkins’ arrest, Mitch Baker (portrayed by Roger Griffiths) took a small step back from all the main drama in Walford, giving himself time to grieve for his daughter Chantelle again.

The cabbie always had his suspicions about Gray but it was confirmed in March, 2022, that the solicitor murdered his first wife.

Mitch then had to face his son Keegan’s exit from Albert Square when the young man left the borough for Germany, alongside his estranged wife Tiffany. But after weeks of standing in the background from all the ups and downs of Walford life, there’s trouble brewing for the Kat’s Cabs driver.

In upcoming scenes of the BBC One soap, musician Omar-Lye Fook joins the line-up as Avery.

The newcomer makes his entrance in his flash car and immediately lands himself into trouble with the Square market traders.

Not wanting to get off on the wrong foot with them, Avery nips any budding tension in the bud by planning a gathering in The Vic and inviting everyone along.

Meanwhile, Mitch is less than interest in a birthday gathering for himself but Karen Taylor (Lorraine Stanley) drags him over to The Vic for a celebratory drink.

However, the pair get more than what they bargained for in the first place as Mitch bumps into Avery – his estranged older brother.

Avery charms Walford residents but things grow tense at the Taylors’ when he impresses Mitch’s family.

The cab driver, on the other hand, refuses to give him the time of day.

Back at The Vic, the brothers hash things out but Mitch snaps at Avery, reprimanding him for when he wasn’t there at his lowest.

Avery apologises and asks a reluctant Mitch to help with a job and while the latter is convinced his sibling has an ulterior motive, Karen encourages him to make amends.

Mitch agrees to give his brother another chance at fixing their relationship and when Avery arrives with a van full of white goods, he’s convinced it’s all legit.

But after doing the job, Mitch realises Avery lied to him, prompting him to issue a warning.

Avery is told to stay away from Mitch’s family and, in another bid to smooth things over, decides to pay him a visit.

Upon his arrival, he sadly collapses and Mitch has no other choice than to call his two sons, Finlay and Felix (respectively played by Ashley Byam and Matthew Morrison).

While the Taylors await news on Avery, the pair arrive and have a shocking revelation to make about their father. What do Mitch’s brother and nephews have to hide? Avery tries to build bridges upon his arrival But his brother Mitch is less than pleased to see him What is Avery hiding?

Did you miss our previous article…
https://www.hellofaread.com/soap-opera/denise-welsh-slams-coronation-streets-michael-le-vell-saying-on-screen-snog-was-like-kissing-a-cats-bum/

EastEnders spoilers: Stacey Slater sent to prison after emotional goodbye with her children

The Masked Dancer viewers all saying the same thing as Sea Slug is finally...

Forget the Blue Rinse Brigade these female candidates show the changing face of the...