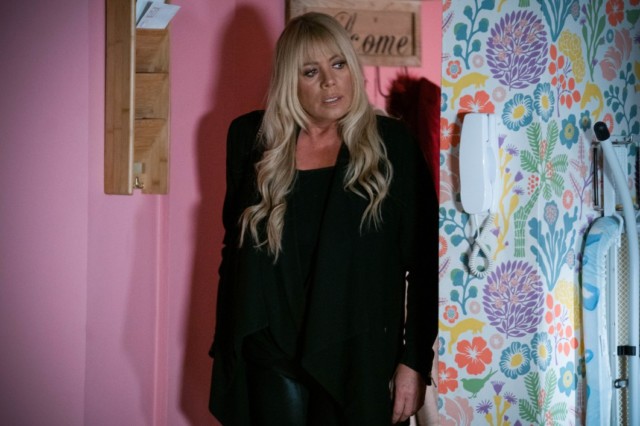 EASTENDERS has dropped a massive hint Grant Mitchell is returning – as his brother Phil faces being murdered in prison.

The hardman – who is played by actor Ross Kemp in the BBC soap – was last seen in 2016 when he made a return for mum Peggy’s funeral.

Desperate Sharon made a call in Tuesday night’s episode

Since then he has been heard in a voice over but not stepped foot in Walford.

In last night’s episode Phil was dumped by girlfriend Kat Slater after she was manipulated by his vengeful sister Sam.

However in tonight’s episode Phil was desperate to speak to Kat but she wouldn’t take his call.

Instead Sharon got a call from Phil and she was summoned to the prison.

In the visiting room, Phil shoved a handful of letters into Sharon’s hand and forced her to take them before his attackers could see.

He told her: “Make sure they get them, yeah? You’re the only one I can trust. I ain’t going to see tomorrow.”

Explaining how he would be killed and he can’t take the deal without putting his entire family at risk, Phil left Sharon horrified by what would happen.

She told him she still loved him and begged him to take the deal and live to fight another day.

Sharon was dragged out of the visitors room by the guards as she screamed at Phil to fight them all.

Later in the Square, sobbing, Sharon decided to call someone else for help.

“Can you call me back as soon as you can, please.”

And fans are convinced he will swoop in at the last minute to save his brother.

One wrote: “2 Grant mentions, PLEASEEEEEEE BRING HIM BACK.”

A second said: “Now get Grant back on the square!!”

Another added: “Can we have Grant back please? Phil needs him.”

Fans think Grant is on his way back to the Square