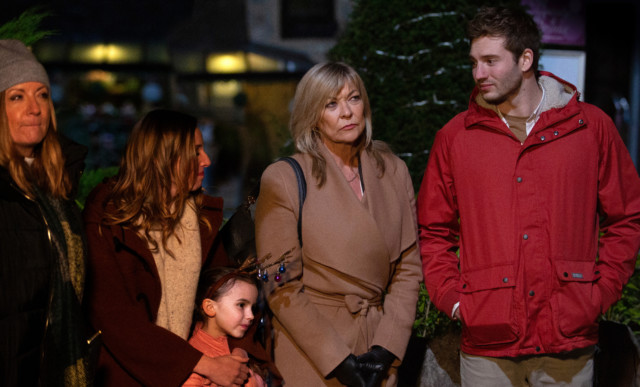 EMMERDALE producer Laura Shaw has revealed some huge spoilers for Christmas – including a major secret being exposed in an explosive festive episode.

The village is set to be rocked over Winter with a number of major shocks hitting the residents.

Christmas will be an explosive affair

Speaking to HOAR Online Laura teased: “We’ve got a really big fun Christmas coming up and it’s jam-packed full of romance, disaster, comedy, heartbreak, shock twists and turns and a huge secret is going to come out in a truly magnificent way that’s going to make everybody gasp, I promise you.”

Home Farm is set to change forever with Laura hinting Kim could lose control of her millions and her criminal empire.

“We’ve got some really exciting things planned for Home Farm and Kim where we’re probably going to see a slightly more vulnerable Kim actually,” she said.

“And we’ll see a change in the dynamic in the Tate family. Could there be a new heir to the throne?” Is Kim about to be usurped at Home Farm? Mandy, Paul and Vinny’s storyline will be huge next year

Is another Tate going to arrive in the village, or will Kim be betrayed by someone closer to home?

The producer also revealed some major spoilers for the New Year with Paul’s secret abuse of son Vinny and his gambling addiction set to become a major plot from January onwards.

Laura explained: “We’ve just finished storylining a massive chapter in our Paul, Mandy and Vinny storyline so keep watching to see how that plays out because it is going to be one of our really big stories in 2021.

“Lives are definitely going to be changed forever.” Jimmy and Nicola will have their lives turned upside down She also revealed how Laurel and Jai will struggle to cope with their decision to have a termination following a pre-natal diagnosis of Down’s syndrome.

“There’s more to come with Laurel and Jai of course because their story does not end with their termination and they’re going to be feeling the effects of the decision they have made for quite a lot of next year,” Laura said.

Laura also teased a shock for the King family, saying: “Jimmy and Nicola are going to get a really big shock in the new year which will result in their whole lives being turned upside down.”

And happy couple Victoria Sugden and Luke Posner should watch out, with Laura teasing drama for them.

“We’ve got more secrets revealed between Luke and Victoria that’s going to have a big impact on their relationship,” she said.

Hotel Chocolat Podster has £100 off in HUGE Black Friday deal