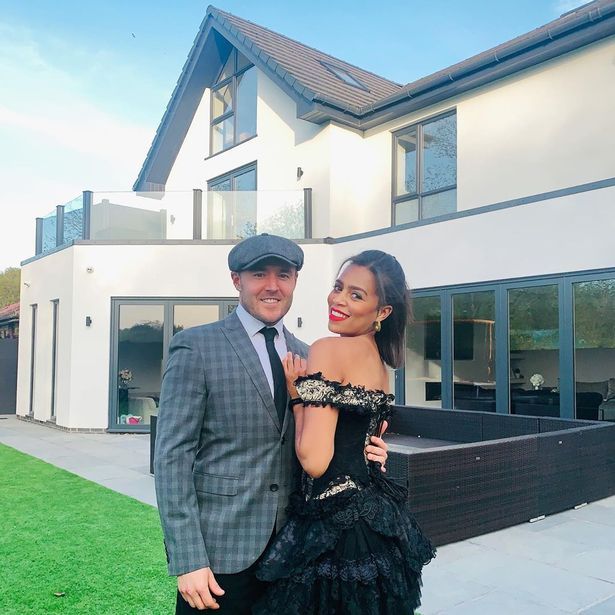 CORRIE stars have given fans an insight into their stunning homes as they share gorgeous pics on social media.

Actors, from Jack P. Shepherd to Alan Halsall and Lucy Fallon have been able to get themselves some pretty plush pads.

Alan designed the stunning home himself

The gorgeous couple live together in Alan’s luxurious, specially-designed £750,000 mansion in Manchester.

There have been plenty of glimpses of what the place looks like inside, with shots of its grand hallway, lavish living room and stunning bathroom.

In addition to the plush home the couple also have a huge garden to enjoy, with a vast barbecue set into the brickwork on one of the walls.

Alan lives with girlfriend Tisha in his £750,000 Manchester home During the summer months Alan splashed out on a huge paddling pool for him, Tisha, and his seven-year-old daughter Sienna-Rae to enjoy.

The little girl spends lots of time round her dad’s house when she’s not at her mum’s Lucy-Jo’s house.

Another Corrie star who has gorgeous digs is Lucy Fallon, who played Bethany Platt in the show until 2019.

The 24-year-old soap star lives up north in Blackpool and regularly shares snaps of her quirky home to her Instagram account. Lucy’s quirky style is reflected in her home decor With an ultra modern garden featuring an enviable set of rattan egg chairs, the photos of Lucy’s home show off her love of neutral colours with a lounge area furnished with deep brown sofa and adorned with a mix of plain and patterned cushions.

Her dining room follows the same colour theme with a dark wood table and matching chairs, looking out into the garden space.

Brightening up the woody tones, the patterned wallpaper lifts the vibe of the room.

Lucy revealed it took her two years to decide how to decorate her home, before she settled on the range of clashing decor and quirky features. Each of Lucy’s rooms is different Lucy likes to clash her prints and colours

Showing off her boudoir, the actress revealed she has a rosewood-coloured headboard backing onto a feature wall covered with black and white leopard print wallpaper.

Fans couldn’t miss the eye-catching lightning bolt neon lights fixed to the wall above her bed.

The pretty blonde announced she was quitting her role as Bethany Platt on the popular soap last year, in order to ‘pursue other projects’ and her final scenes on the cobbles aired earlier this year.

Lucy’s on-screen mum, Tina O’Brien, 37, has given fans lots of glimpses of her home as the mother of two often shares little insights to her northern home. Tina has told fans she loves her northern home The actress has been playing Sarah-Louise Platt on the Weatherfield cobbles since 1999 and has remained based in her hometown, Manchester.

Tina, who lives with partner Adam Crofts and their son Beau, and her daughter Scarlett, who she shares with ex Ryan Thomas, has chosen a monochrome colour scheme for the stunning house.

There’s also a full length mirror perfect for selfies in a bedroom while Tina and Adam’s bedroom also features long, dark curtains as a backdrop to white furniture. Brooke’s home has a huge mirror with candles

Corrie actress Brooke Vincent, 28, who is currently on maternity leave from the soap – and just revealed she’s expecting her second child – shares a stunning home with her partner Kean Bryan and their baby son Mexx.

Keen to show off the stylish space on her dedicated home interior Instagram account, Brooke’s home features many industrial accents including a set of factor lights in her living room.

Alongside the snap of the home accessories, she wrote: “These are my living room lamps. I have one either side of the fireplace. I absolutely LOVE industrial items.

“We previously lived in an apartment with an open brick wall and I’ve loved that vibe ever since. I’ve added vintage warm bulbs to the lights to add a cosy element.” The cosy space also features a comfortable grey leather sofa, which is adorned with plenty of printed pillows.

Other room features include a stylish gold vase, candle holders and a traditional log burner.

And when it’s cold, Brooke and boyfriend Kean can wrap up on the sofa using a selection of stylish throws.

The actress said: “The fireplace, I absolutely love this fire area, I love the matte black finish and we was so lucky to have it already in the house from the previous owner, It looks so cosy once it’s lit, I wouldn’t know as I’ve never actually lit it but in pictures it looks fab Jack and Hanni have made their Manchester flat their own

“I have a little basket on the side with the throws in for winter time or Sundays watching films. It’s just a more decorative way of having them to hand instead of them being draped on the sofa.”

The couple moved into the new pad together after 14 months of dating and have been busy making the place their own. There is a large bay window that offers plenty of light in the room as well as a gorgeous chandelier.

The couple have made the house very dog friendly and their pooch Lady even has her own bed with her name on it.

Did you miss our previous article…
https://www.hellofaread.com/soap-opera/im-a-celebrity-campmate-jessica-plummer-says-singer-jesy-nelson-was-brave-to-quit-little-mix/

EastEnders Maisie Smith looks stunning as she dresses up for Halloween in a catsuit...

Priti Patel warns Brits will be slapped with criminal records if they breach new...