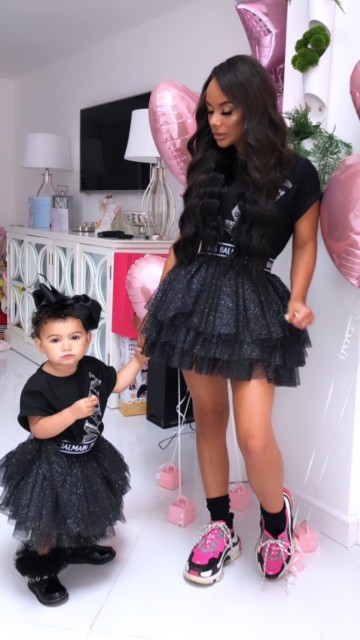 The 32-year-old star – who plays Goldie McQueen in the Channel 4 soap – teased ahead to the bash today with videos on Instagram.

The star gave her 618,000 fans a glimpse into her glamorous life and said: “Love you baby girl.

“Lil one before big ting on Saturday!”

Showing off a pile of sweets and biscuits she ordered, Chelsee added: “This is me not going all out for Coco’s birthday ffs!”

The cute mother and daughter were surrounded by dozens of pink balloons, including a shiny number four balloon, and a number four light stand.

A table was brimming with the little girl’s favourite sweet treats from Refresher lollipops to Love Hearts and Jammy Dodger biscuits.

Soap star Chelsee has raised Coco as a single mum after she split from Coco’s dad Jack Malloy.

They parted ways for good not long after giving birth to Coco in July 2017, after an on/off relationship.

The pair first started dating in 2014, but the relationship was plagued by trouble after he was jailed for 12 months in 2016.

HOAR revealed how Jack, 28, admitted dangerous driving, using a vehicle without insurance and driving while disqualified.

He’d previously been given a suspended sentence for producing cannabis. Chelsee put a spread on at home Im A Celebritys James Haskell says he met Caitlyn Jenner at the bridge to...

Piers Morgan reignites war with Meghan Markle as he says he ‘believes in mental...

Meghan Markle wants to be more politically engaged and could intervene in US election...

Brits who got Indian-made jabs shouldn’t be banned from EU demands PM – as...