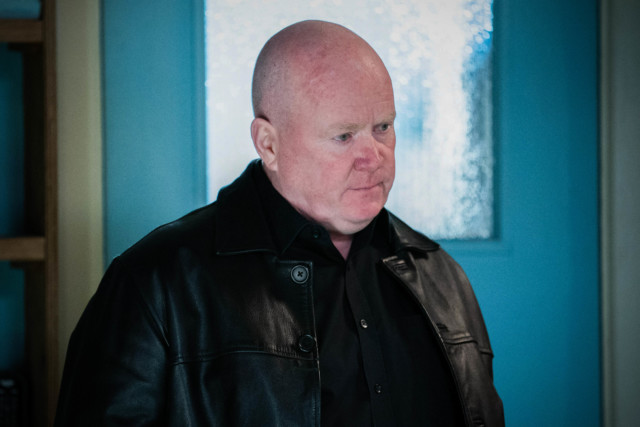 THE fate of EastEnders bad guy Phil Mitchell is left in balance as the character could be going away to prison.

In recent episodes of the BBC One, the tough man played by Steve McFadden has been tying up any loose ends in the outside world.

EastEnders viewers have been left in utter disbelief by Phil’s recent actions.

The long-term Walford villain recently broke up with his girlfriend Kat Slater in sad scenes.

Phil decided to separate from Kat to spare her from heartbreak after he was given the choice between a prison sentence and life as a police informant.

But for now, and after seemingly meeting a dead end, his fate in Albert Square is left open for speculation.

Spoilers have seemingly confirmed that he is set to accept his fate and spend the rest of his life behind bars in order to protect his loved ones, despite hearing advice from beyond the grave.

In upcoming scenes, set to air next week, Phil hands over the keys of his empire to his ex-wife Sharon Watts (Letitia Dean) after coming clean to Kat about his dilemma.

What happened to Phil Mitchell?

After his involvement in Vincent Hubbard’s death was revealed to the police, Phil thought that his surprisingly clean criminal record would be tarnished by a sentence.

Instead, and as mentioned above, the manager of The Arches was given a tough choice between life in prison and partial freedom as an informant.

The decision was left to him by DCI Samantha Keeble after he turned himself in to the police.

Phil had initially planned to flee England alongside his son Raymond.

Passports and new identities at the ready, Phil asked Kat if she would be willing to leave her life in Walford with him.

A suggestion she refused, leading her partner to have a change of heart and face the music, thus returning Raymond to his mother Denise Fox.

Phil thought he could only get five to seven years in prison for his actions, much like Jessie Wallace’s Kat.

However, he suffers a blow when he was told by his lawyer Ritchie Scott (Sian Webster) that he would instead be hit with a life sentence if the police gathered enough evidence against him.

Fans have been fuming at the prospect of the law catching up to the soap legend.

How long has Steve McFadden been in Eastenders?

Phil is one of the longest standing villains, appearing in EastEnders for the first time in the 1990s.

On Christmas Day 2003, he was given a choice by “Dirty Den” Watts after attacking him.

Both characters had been feuding, notably over Kate Morton.

Left with little choice due to being on the run after escaping from prison (which could be a hint to a potential return if the villain truly accepts his sentence), Phil accepted Den’s offer and left Walford with the money he was offered.

Steve McFadden reprised his role for a brief stint in April 2005, after his character ran out of funds, before making a more permanent return in October.

The actor has appeared in a total of 3,283 episodes of EastEnders.

But is this really the end of the line for Phil? Phil already managed to escape prison once. Could he try again?

Ant and Dec forced to make huge change to I’m A Celeb after Storm...

Thousands of households could get £100 off their council tax under new plans –...

Forget Halloween remaining in this Brexit limbo is the scariest prospect