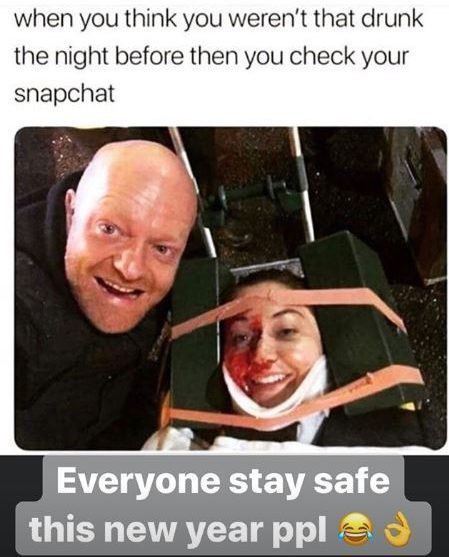 JACQUELINE Jossa has shared a hilarious EastEnders meme as she warned fans to “stay safe” this New Year’s Eve.

The former soap star shared a picture on her on the set of the BBC drama in character as Lauren Branning alongside on-screen father Max Branning, played by Jake Wood.

The behind-the-scenes pic showed Jac in a neck brace and strapped to a stretcher smiling at the camera, while Jake grins and takes a selfie of the pair together; the caption read: “When you think you weren’t that drunk the night before then check your Snapchat.”

It appeared to be a picture taken during filming of the soap’s explosive 2017 Christmas day storyline which saw Lauren and her sister Abi plunge from the roof of the Queen Vic pub.

Abi died from injuries of the fall, and the loss of her sister encouraged Lauren to think of the future, leading her to leave Albert Square.

Pregnant Abi plunged from the pub roof alongside her sister Lauren while trying to stop their disgraced father Max from taking his own life.

She was devastated by the death of her sister Abi

Jac was the second actress to play Lauren

They were rushed to hospital but, while Lauren managed to pull through, Abi’s life hung in the balance.

Earlier in December, the mother-of-two was revealed to have turned down a return to EastEnders in favour of making millions as one of the most sought after women on TV.

The 27-year-old was approached by bosses four months ago, but with a variety of hugely lucrative offers on the table, she turned it down; she went on to be crowned Queen of the I’m A Celebrity jungle.

Soap stars of Jacquelines calibre can earn around 250,000 a year on EastEnders, but Jacqueline can make that from just a few Instagram posts particularly now she has won Im A Celebrity.

Jac and husband Dan Osborne have two daughters together

A pal told HOAR Online: Jacqueline had a few conversations with bosses about a big return four months before she entered the jungle.

After weighing up her options she just felt the money wasnt enough compared to what she could earn elsewhere.

She loves EastEnders and thoroughly enjoyed her time on the show but Jacqueline is a very talented young woman and not just when it comes to acting.

“There are lots of strings to her bow and there’s lots of things she wants to try, which she can’t do when she’s on EastEnders.”

Love Island reveal one couple will be dumped from the villa tomorrow ahead of...