STACEY Slater has been preparing herself to welcome her mother Jean back home after her stay in hospital.

But the cleaner has already been discharged and is staying with another familiar face. Get the lowdown on the EastEnders drama.

Jean Slater was hospitalised earlier in 2022

Stacey was getting ready for her return home 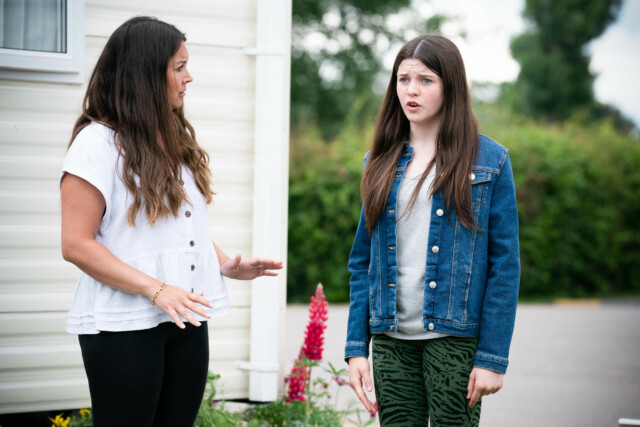 After several difficult months, Stacey was hoping to be reunited with her mother again, following her stay in hospital.

The cleaner played by Gillian Wright accepted the help of professionals when she realised she was putting her entire family in danger with her behaviour.

Meanwhile, the owner of Stacey’s Baps (played by Lacey Turner) has focused on her family life – and her romantic connection with Kheerat Panesar (Jaz Deol).

In doing so, she completely forgot she had a holiday booked at a caravan park before the pandemic and tells Martin Fowler (James Bye) they need to make the most of it that same day.

The Walford market trader first declines her offer to go on holiday, prompting her to turn to Kheerat who also politely refuses to tag along.

However, Martin later talks with his pal Zack Hudson and admits he regrets saying no.

This leads to him backtracking and turning up at Stacey’s as she packs up her things – and Kheerat follows suit.

The trio make their way to the caravan park but the holiday is off to a rocky start when both men bicker about who get to choose dinner.

While she may be accustomed to handling children, she’s shocked by Kheerat’s stroppy attitude when he loses.

The pair eventually make up but something else distracts Stacey.

When they head off to dinner, she gets the shock of a lifetime when she sees her mother Jean is her waitress. 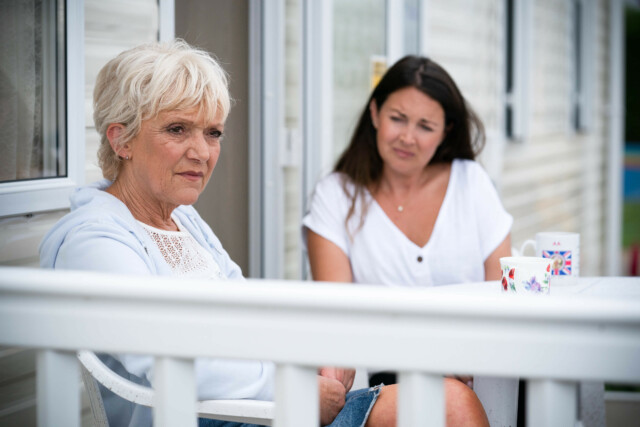 Surprisingly, Jean has been staying with Mo Slater

But that won’t be the only surprise Jean has for her daughter.

Kheerat tries to convince Jean to talk to Stacey but is stopped in his tracks by a desperate message from his mother Suki.

Later on, Stacey manages to meet up with Jean but she gets a shock when she realises she’s with Mo (Laila Morse).

The three of them catch up around some drinks and Stacey asks her mother why she’s here and not staying with her friends.

She then asks her to come home but Jean is clearly worried people in Albert Square are gossiping about her due to her behaviour.

Jean drops a bombshell on Stacey – she can never show her face in Walford again after her episode.

Stacey isn’t one to give up easily and continues her mission to get her mother home.

Her daughter Lily interjects and gets emotional, prompting her to have another chat with Stacey and Jean.

Will Jean consider going back to Albert Square? 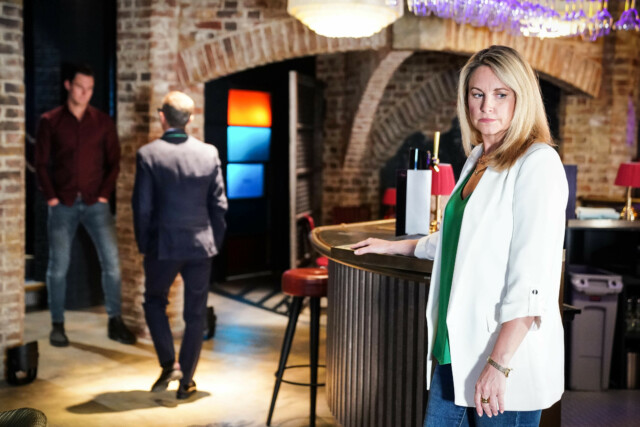 Sam is desperate to get back into Phil’s good books

Worse still, she allowed him to get high in Peggy’s with a little supplying from one of Jonah Tyler’s men.

Unwilling to put up with Sam’s treachery, Phil has kicked her out of the family altogether.

But Sam has yet another trick up her sleeve and is willing to go to great lengths to make it up to the Walford baddie.

This includes bringing Ben justice for his rape.

She decides the only way she can earn her brother’s trust again will be to bring him Lewis Butler, who raped Ben earlier in 2022.

But will she find him? 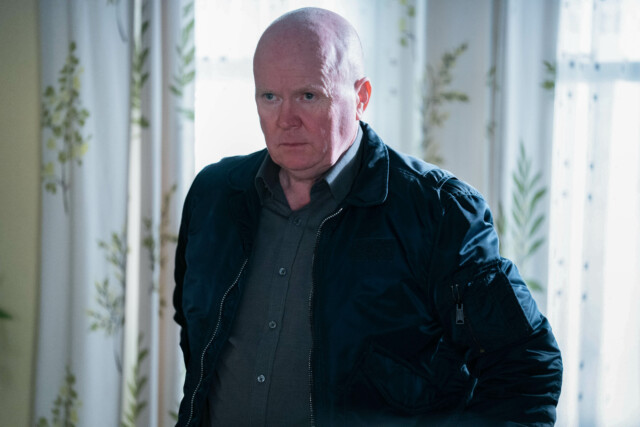 But while Lewis may soon get in trouble with the Mitchells, Phil is ready to make Suki Panesar pay for leaving his son unattended to as he was overdosing in the streets.

However, Phil’s approach is more straightforward.

This week, he decides to publicly confront the businesswoman played by Balvinder Sopal in the Vic.

His short fuse comes to light again and Phil gets ready to fight – until Kheerat interjects.

The latter manages to get Phil to back down.

But as he leaves for a holiday at the caravan park with Stacey and Martin, someone else means his mother harm. 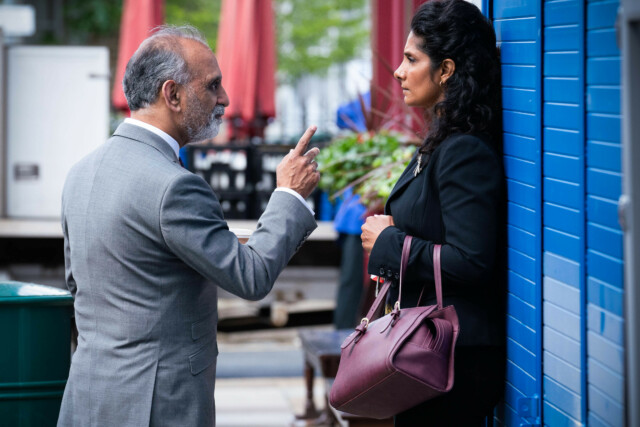 Suki is blackmailed by Ranveer Gulati this week

Suki Panesar is successful when it comes down to business but more than often fails at finding reliable allies.

On the contrary, she’s particularly talented at making enemies and, sadly for her, Ranveer Gulati (Anil Goutam) has become one of them.

The businessman first had a plan with Kheerat to build a palatial home for himself in Mumbai but blackmails Suki this week.

Ranveer vows to close the business deal they’ve had in mind… if she sleeps with him.

After some words of wisdom from Eve Unwin, Suki agrees to meet Ranveer but the meeting goes awry very fast once he finds out she’s tried to outsmart him.

Ranveer refuses to leave and insists that Suki needs to make it up to him but she stands her ground.

A fight soon ensues and Suki leaves Kheerat a voicemail, pleading for help, while her son is away on holiday.

Kheerat gets her message and drops everything at the caravan park to come to her rescue.

But, back in the Square, Ranveer overpowers Suki, ready to torment her… and she whacks him over the head.

Meanwhile, Ranveer’s son Ravi (portrayed by Aaron Thiara) is looking for his father and Eve points him in Suki’s direction after seeing him head there.

But when he walks in, he only finds his father’s lifeless body and Suki is in shock.

What will he do?

Will Kheerat find his mother alive and safe? 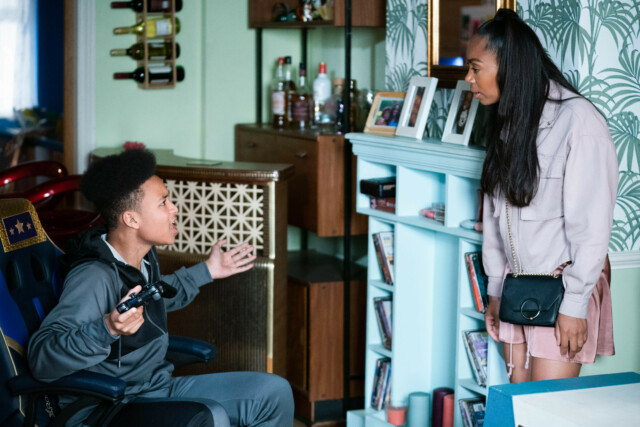 But he turns out to be more troublesome than expected this week.

Kim’s niece-in-law Amy takes a shine to Denzel and tries to impress him but her father Jack (Scott Maslen) interjects, unimpressed by her outfit.

However, Kim is pleased to see her trying to get along with Denzel and plays it down.

Sadly, things take a nasty turn for Amy when Ravi’s son Davinder aka Nugget shows up.

Both Denzel and Nugget wind Amy up, leaving her seriously upset.

Later on, Chelsea Fox (Zaraah Abrahams) finds a teary Amy who tells her what happened.

A fuming Chelsea finds Denzel and Nugget, ready to put them in their place.

This also prompts Kim and her sister Denise Fox (Diane Parish) to support Amy with the realities of becoming a teenager, as she’s only three months away from her fourteenth birthday.

Chelsea takes matters into her own hands again by giving him and Nugget some stern words.

Will Denzel apologise for his behaviour? 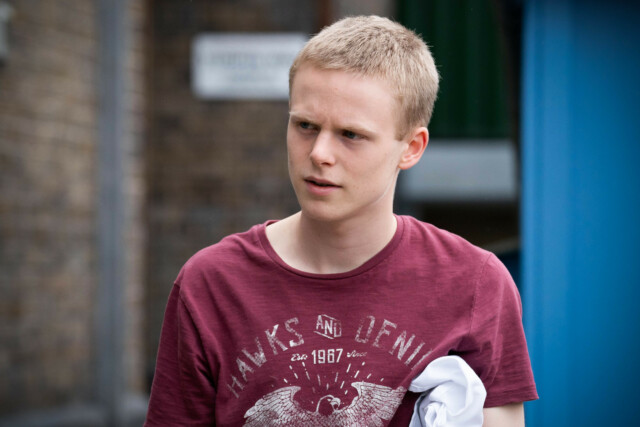 Can Bobby and Dana fix their relationship?

The lad talks about his plans to invite her out for some friendly drinks to Rocky Cotton – unaware the former con man will jump to conclusions.

Rocky soon tells Dana and Bobby respectively that they both want to rekindle their romance.

The pair then meet up and their nerves are kicking in.

Will they agree to give their relationship another shot?

Or has Rocky really gotten the wrong end of the stick?

Find out this week on BBC One.

Did you miss our previous article…
https://hellofaread.com/soap-opera/coronation-streets-audrey-roberts-confirms-heartbreaking-suicide-attempt-in-harrowing-storyline/

Martin Lewis fan explains how she got £4,000 council tax refund – check if...

Broadband where do Conservatives, Labour and Lib Dems stand?