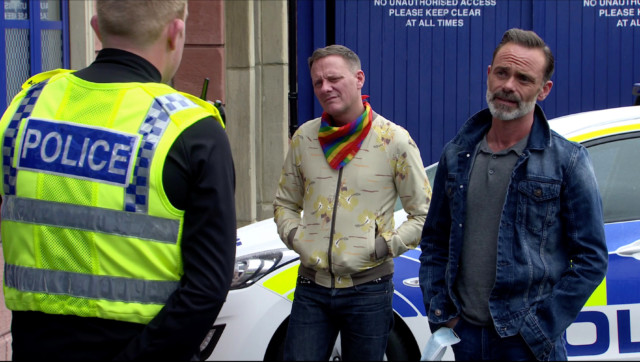 CORONATION Street’s Craig Tinker dropped the bombshell last night that Todd Grimshaw is no longer being hunted for by the police.

The legal assistant fled from the cobbles after assaulting a police officer – and his friends and family assumed he was still on the run. So what’s the real reason Todd has been keeping away from Weatherfield?

Why did Todd leave Corrie and go on the run?

The drama began when lovebirds Todd and Billy Mayhew became embroiled in a custody battle in 2017 with their adopted daughter Summer’s grandmother, Geraldine.

Billy and Todd eventually ran away with Summer to keep her away from the evil granny.

But Peter Barlow put a spanner in the works by abducting Billy and threatening to throw him off a cliff as payback for his role in the death of his twin sister Susan.

Adam later found a letter from Todd saying he had left Weatherfield to protect Summer.

But Summer returned in January 2018 without Todd and explained that he’d gone on the run from the police after assaulting a police officer.

But of course, viewers know that Todd’s off-screen exit was really to facilitate actor Bruno Langley’s departure after he was axed from the soap. Why has Todd stayed on the run in Corrie?

Fans were left baffled by Craig’s bombshell and confused why Todd is still on the run if he isn’t being hunted for by the police.

One fan tweeted: “Where’s Todd & why exactly hasn’t he been in touch with Eileen before now? Does she even know he’s already been questioned/released by the Police? #Corrie”

Where's Todd & why exactly hasn't he been in touch with Eileen before now? Does she even know he's already been questioned/released by the Police? #Corrie

so something bad must've happened just because Todd hasn't contacted Eileen?!
smh Sean is a prat

maybe Todd has been in contact with Eileen who's kept it to herself, it is her business after all!#Corrie

With Corrie keeping shtum, fans will have to tune in to find out. Does Craig know where Todd is in Corrie?

Coronation Street are yet to confirm why Todd is still on the run in Corrie, but fans are convinced Craig knows more than he’s letting on.

One fan tweeted: “Craig’s hiding something. Does he know where Todd is? #Corrie.”

Another added: “#Corrie so why does Craig seem so guilty about the Todd mystery?”

#Corrie so why does Craig seem so guilty about the Todd mystery?

Craig's hiding something. Does he know where Todd is? #Corrie

Who will play Todd in Corrie?

It has been confirmed that actor Gareth Pierce will take over the role three years after Bruno Langley was axed.

New soap star Gareth said: “I’m thrilled to be joining such an iconic show, and to have been entrusted with taking Todd forward into some really exciting storylines.

“It’s an honour to be part of the dedicated Coronation Street team in such unprecedented times.”