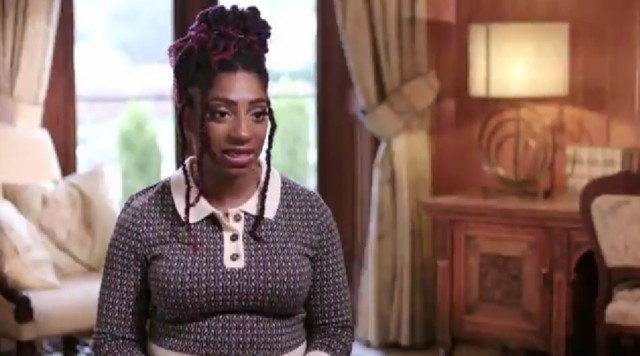 I’M A Celebrity star Kadeena Cox has admitted that camp’s evacuation from Gwyrch Castle in the midst of Storm Arwen made their experience so much “harder”.

The stars were forced to be evacuated from their beds in camp and were kept in the main hall of the Welsh castle for their safety during the harsh storm.

TV insiders revealed at the time how the camp was left in total disarray after being battered by the 90mph winds, leaving parts of the castle in total ruin.

I’m A Celebrity… Get Me Out Of Here was forced off air for two nights as repairs were made to the camp, meaning the stars were ushered back into isolation.

Reflecting on their sudden exit, Kadeena discussed how the evacuation affected the group on last night’s Legends of the Castle

She said: “I think people may think we had an easy ride but actually I think [the storm] made it harder.”

After their exit from the ITV competition, other campmates reflected on the terrifying experience, admitting tears were shed as they sheltered from the storm.

DJ and presenter Snoochie Shy explained how she “sobbed” as they left camp.

She said: “We didn’t know the extent of how bad the storm actually was when we were inside. When we were told we had to leave and go back into isolation, I actually started crying.”

Co-star Frankie Bridge chimed in that they only realised how “serious” the situation was after being moved to the Grand Hall.

Other stars concurred that the “massive pause” on their journey made it a lot harder for the group to get used to life inside the camp.

“It was something that I was gutted about as we’d just started to get used to camp life in this crazy but amazing show,” winner Danny Miller revealed.

It comes as Simon Gregson revealed a secret rule break that was NEVER caught on camera during his time in the castle.

“I would try to smuggle in some salt, pepper and a lot of stock cubes,” Simon tells the cameras after walking out of the Gwrych Castle camp.

Simon wasn’t the only one who smuggled goods into the camp, as co-star and Paralympic athlete Kadeena Cox previously revealed she had tried to take sweets.

On her exit from the castle, hosts Ant McPartlin and Declan Donnelly lined up the contraband items – including apples, Werthers Originals and Fruitella sweets.

Athlete Kadeena, 30, was identified as the unlikely worst offender – sneaking as many as 25 items into her socks, coat, rucksack and pockets. Gwrych Castle was left battered by the storm, meaning the celebs had to be evacuated

Boris Johnson news – NHS staff WILL be forced to have Covid jabs to...

When did Britain join the EU?