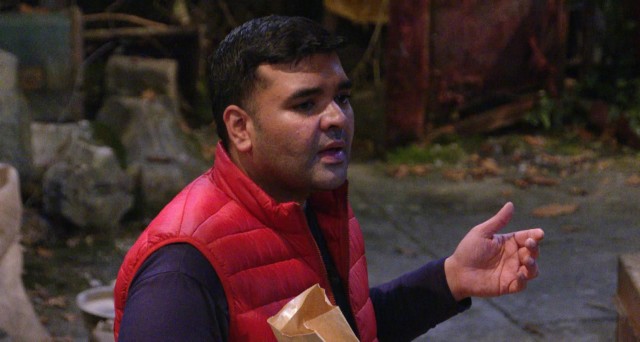 JUST four days into I’m A Celebrity and there is already a stand-out campmate – Naughty Boy.

The producer, 36, has divided the public and some of his fellow celebrities after threatening to quit, arguing with Frankie Bridge and sleeping a lot.

But while some viewers have turned on him, body language expert Judi James is convinced his behaviour is down to him being “treated like a child”.

Analysing his behaviour on the show so far, Judi believes there are “two very compelling reasons for his behaviours” – and she says neither are his fault.

She explains: “Firstly this is a very alpha-dominated group. David Ginola oozes alpha male from every fibre of his body and, before he had to quit, Richard Madeley provided some paternal back-up.”

She believes that the two new arrivals of the ‘lords’ has pushed Naughty, Matty and Danny even further into the role of children.

Judi continued:  “Naughty has an adorable, caring and very sweet side that fits this role perfectly and triggers the maternal instinct in Arlene, while more dominant females like Frankie and Kadeena treat him like a younger brother.”

But Judi believes their treatment has been “humiliating” and because he won’t play the game like others – it’s started to cause friction.

She said:  “If Naughty wanted to play the game in there and pretend, like many of the other celebrities, that it is all peace and love and ‘the best time of my life’ there wouldn’t have been a ripple on the surface.

“But Naughty is thirty-six years old, a grown man with a job that must come with power and a sense of respect from his colleagues and acting like a passive, compliant child for days on end when he is hungry, cold and treated what he sees as unfairly is clearly not to his taste.”

She added:  “Looked at through the lens of a rather reflective grown man, the flashpoints have been potentially humiliating. When he asked to do some cooking he was told by Kadeena that she could ‘let’ him do it and Frankie’s comment about him coming to their camp and wanting to change things did sound critical in his ears. These are small but important power skirmishes.”

Naughty has been dealing with this issues with “withdrawal”, says Judi, which could be an attempt for him to gain power.

She believes his antics go “against whole culture of IMAC, which is to pretend to be enjoying the most horrible trials and conditions while forming a strong team dynamic.

“The celebrities know all about performing and giving good camera and that means pretending to be instantly and deeply in love with people you have rarely met before.”

She added that she’s concerned he’ll struggle if they don’t start treating him more like an adult.

“Under pressure Naughty moves from a state called ‘Compliant Child’ to a more ‘Rebellious Child’, threatening to leave or not play along with the others,” she explained.

“In each of the incidents so far he’s probably been in the right but when a powerful female alpha like Frankie sits sobbing as a result he suffers a minor catastrophe in terms of group dynamics. Frankie ended up crying after her row with Naughty Boy Naughty Boy has formed a good bond with Arlene

Kate Middleton stuns in £849 tartan coat as she attends NHS film screening with...