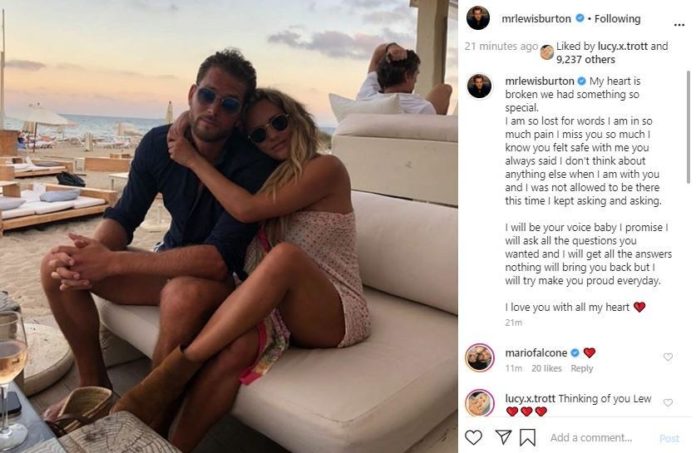 CAROLINE Flack’s distraught boyfriend has vowed to “get answers” after her shock suicide.

In a heartbroken post today Lewis Burton slammed the CPS for banning the couple from contacting each other.

It comes hours after her management also blasted prosecutors for pursuing the “vulnerable” star and continuing with a “show trial” before she tragically took her own life.

Lewis today posted: “I will be your voice baby I promise I will ask all the questions you wanted and I will get all the answers.

“Nothing will bring you back but I will try make you proud everyday.

“I love you with all my heart

Former Love Island host Caroline, 40, was told on Friday the CPS were continuing with an assault trial – even though she and her boyfriend Lewis Burton urged authorities to discontinue it.

She had been accused at a court hearing on December 23 of hitting him over the head with a lamp at 5am as he slept.

Caroline was said to have been determined to prove her innocence when the case eventually went to crown court, scheduled for March 4.

But she was also tormented by strict bail conditions which prevented her from contacting Lewis until after the trial.

Lewis, 27, today added: “My heart is broken we had something so special.

“I am so lost for words I am in so much pain I miss you so much I know you felt safe with me you always said.

“I dont think about anything else when I am with you and I was not allowed to be there this time I kept asking and asking.”

He had previously repeatedly spoken out of the distress caused by the banned contact with Caroline, and his wish for the case to be dropped.

Lewis rushed back from a skiing holiday yesterday after being told the shocking news.

On Friday he had posted a picture of the couple, saying: Happy Valentines. Love You.

Her death is being treated as non-suspicious, with a post-mortem scheduled and an inquest set to open this week.

A source close to her said yesterday: This is the most dreadful and shocking news and has come as a bolt from the blue for everyone.

Caroline has been very low but absolutely no one saw this coming or had any inkling she felt this way. Otherwise she would never have been left alone.

The timing of this is just dreadful and suggests that being apart from Lewis on Valentines Day may have proved the final straw for Caroline.”

Laura Whitmore, who replaced Caroline on Love Island for the latest series, tweeted “I’m trying to find the words but I can’t”, followed by a broken heart emoji.

Dermot O’Leary, who previously worked alongside her on The X Factor, posted a picture of the pair of them together on Instagram.

He said: “Just the worst news. Poor soul. Sending love to hers, and yours. Hold them tight tonight people. X Candles lit.”

In 2011, Caroline presented The Xtra Factor with Olly Murs and later Matt Richardson before later hosting the main show in 2015 to replace Dermot O’Leary.

After he returned to the show, Caroline took on her biggest role as presenter of Love Island the same year.

Along with as hosting Love Island’s weekly spin-off show Aftersun, she hosted all five series of the popular programme – one of the most-watched reality shows in the UK since it launched in 2015.

As well as presenting on TV, Caroline was also crowned winner of the 12th series of Strictly Come Dancing in 2014 with Pasha Kovalev as her partner.

Lewis, 27, yesterday rushed back to the UK from a skiing holiday after being told the news

Caroline’s best friend, Mollie Grosberg, paid tribute to her after her death

EastEnders’ Scott Maslen looks worlds away from Jack Branning as he picks up lunch...

Summer is coming to an end but we’ve got the hot deals to keep...