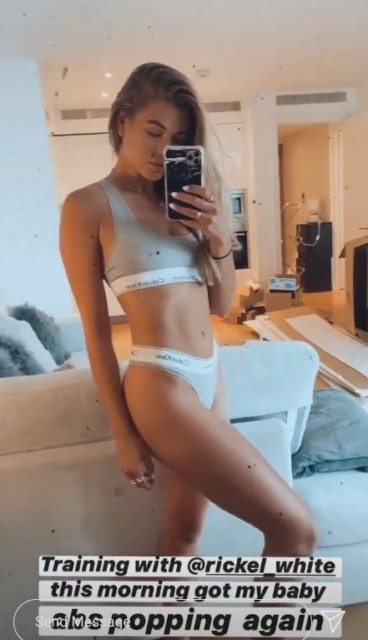 Arabella, 29, moved into the the London flat with Harley, 21, just weeks after her split from her Love Island boyfriend Wes Nelson.

Arabella Chi, 29, coordinated her workout gear with the lounge room

The girls are slowly getting the unpacking done with boxes still filling the lounge room, but their bachelorette pad is already enviably stylish.

Harley and Arabella – who have become close pals since leaving the villa – have decked out their lounge room out in shades of grey.

The corner sofa dominates the room, which the girls have draped with cosy blankets and stylish throw pillow.

Floor to ceiling windows lead out onto the balcony, but to get to it one must pass the very cute dog curled up in its dog bed in front of the dark grey curtains. Astro the dog, loves the grey themed lounge room and his doggy bed The model moved in with her Love Island BFF this week

Arabella even managed to coordinate with the room and showed of her abs in a matching grey Calvin Klein bra and undies set.

Harley opted for an all-white scheme for her bedroom, excluding the copper vintage style lamp next to her bed.

Their small, but modern kitchen is fitted out with a solid wooden table and designer leather brown kitchen chairs. Harley chose an all-white them for her room

They were given a helping hand by a moving man, who assisted them with their belongings.

At one point, Harley appeared completely worn out as she lounged on a wall outside.

Arabella took to Instagram Stories to document the day and shared a snap of a bottle of wine, an envelope and keys.

She captioned the shot: “Move in day @harley_brash.” Her small but modern kitchen is filled with enviable wooden furniture Back in April, HOAR exclusively revealed Wes and Arabella had officially split after nine months of dating.

Wes, 22, moved out of their shared home after he and Arabella grew apart – with the six-year age gap said to have been a factor.

A source close to the couple told us: “It’s all over. They started to grow apart and the age gap became really noticeable between them.

“They want to remain civil with each other and hope to remain friends.”

Our insider went on to add: “There’s been no funny business, no cheating or anything like that, it’s just fizzled out between them.” She regularly posts sexy snaps of herself around her bachelorette pad

The break-up comes just months after the pair decided to move in together, with Arabella telling fans in December that she was moving out of her flat of eight years to set up home with Wes.

The professional model – who appeared on ITV2 show in 2019 – said: “Packing completed. Eight years in this flat.”

Wes previously dated Megan Barton-Hanson, but the pair ended up splitting after he grew close to his Dancing On Ice skating partner Vanessa Bauer.

The pair had looked set to rekindle their romance before Megan discovered he had been sending “rude messages” to Amber Davies. Ant and Dec fuel rumours I’m A Celebrity is returning to Wales for 2021...

When does Zak Dingle return to Emmerdale?

Keir Starmer favourite to be next Labour leader heres who else could replace...