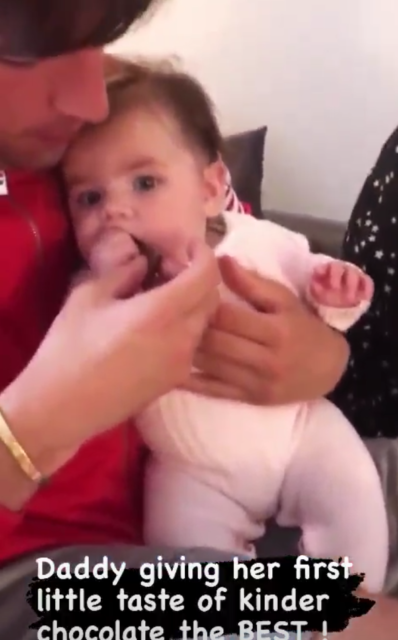 JACK Fincham shared a sweet video with his daughter after his baby’s mum claimed he only saw her three times in eight months.

The Love Island winner doted over his daughter Blossom on Instagram after Casey Ranger hit out at the reality star and said he rarely sees her.

Jack cuddled little Blossom in the sweet clip and gave her a taste of chocolate which she appeared to love.

In another snap, he tagged his mum Sam cooing over the gorgeous tot.

Jack shared an inspiring quote along with his videos, after Casey’s scathing messages.

He said: “Sometimes you have to get knocked down lower than you have ever been, to stand up taller than you ever were.” He shared a string of photos of his little girl Jack shared an inspiring quote along with his videos

Casey raged in a series of posts on Tuesday, saying Jack had deceived fans by presenting himself as a doting dad on social media – even though he hasn’t even bought his child a “teddy”.

Casey, 30, took to social media to blast Jack in a stinging post accusing him of manipulating his audience and fans.

She wrote: “…After keeping quiet for so long I now feel like I’m being backed into a corner and have no option but to speak up for the sake of my little girl & my own peace of mind.

“It was extremely difficult to watch Jack speak about Blossom on the TV show earlier this week, he spoke in such a deceiving way that tried to present himself as a ‘father’. Jack announced in January that he had become a dad

“A father who hasn’t gone out of way once to buy his daughter a teddy bear. Any one who watched it may have been fooled, but the truth is, he’s seen Blossom three times in eight months!!!!

The NHS worker went on: “It angers me how someone in the public eye can easily twist & manipulate a situation, especially one that involves my daughter.

Clearly riled about Jack’s appearance on new series Love Island: What Happened Next, Casey continued her post telling her followers not to be “fooled” by him. Casey told her followers not to be fooled by Jack

She added: “Don’t be fooled by what you see. I’ve kept quiet for far too long and had to sit back and watch this person use my daughter for his own self gratification.

“I hope you can understand how difficult it’s been to write this and to speak publicly about such a private matter involving my daughter.”

Jack stunned everyone back in January when he announced the birth of his first child – a daughter called Blossom – on Instagram.

Warrington will go into Tier 3 lockdown next Thursday as Nottingham on the brink...