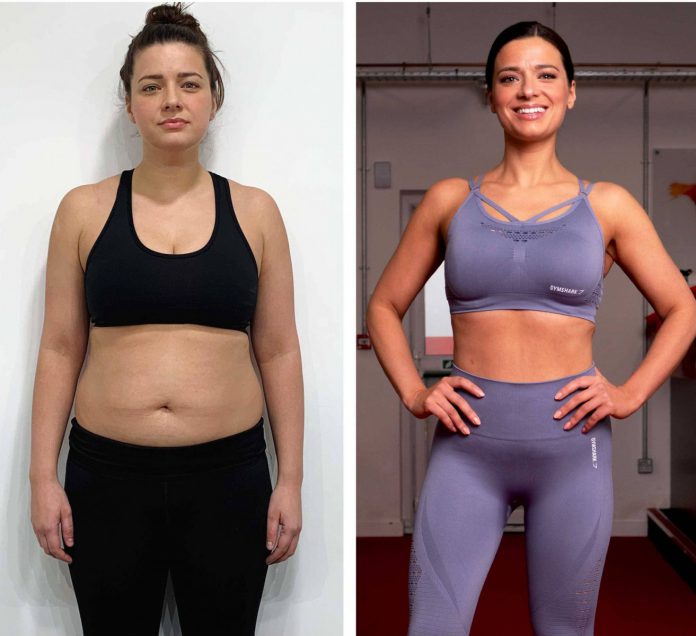 HOLLYOAKS actress Sophie Austin has lost almost three stone in weight after struggling with her baby weight and crippling anxiety.

The 35-year-old, who is best known for playing Lindsey Butterfield in the Channel 4 soap, turned U.P Fitness in Cheshire alongside partner Shayne Ward and in a few months had completely transformed her body.

But it wasnt without difficulties though as she had to battle gallbladder removal surgery and sepsis during the process, before reaching an impressive 19kg weight loss.

Speaking about her journey, she said: I never thought I would feel the way I do now, I never did. Its been brilliant.

Sophie, who left Hollyoaks in 2016, gave birth to their daughter Willow in December 2016.

I put on a lot of weight when I was pregnant. It was a free-for-all I was eating for four, almost. Both myself and my partner Shayne were eating a lot and using it as an excuse. Then after I had my daughter the weight didnt go. I didnt have the time to go to the gym and I was always knackered.

I think I saw a picture of myself I was all dressed up and I just looked really lost. I just looked like I just had no confidence in myself. I think that I never felt very confident about what I looked like, even before when I was really skinny.

Discussing working out alongside her partner, Sophie said: We have been spurring each other on. I will say to Shayne that I can definitely see a difference in him not just physically, but his attitude. I feel like hes got his confidence back.

Hes nailing things because hes got that confidence and he believes in himself again. Im just so proud of him because I think hed got to a point where he was unhappy with how he looked and people commenting on his appearance.

And its hard being in this industry, where people are always talking. I think he looks great no matter what. Im so proud that hes achieved that and he just looks happy. Thats what makes me happy.

EastEnders fans in meltdown over return of hated character who found fame in Footballers’...

700,000 disadvantaged kids are NOT doing home work and don’t have access to computers,...