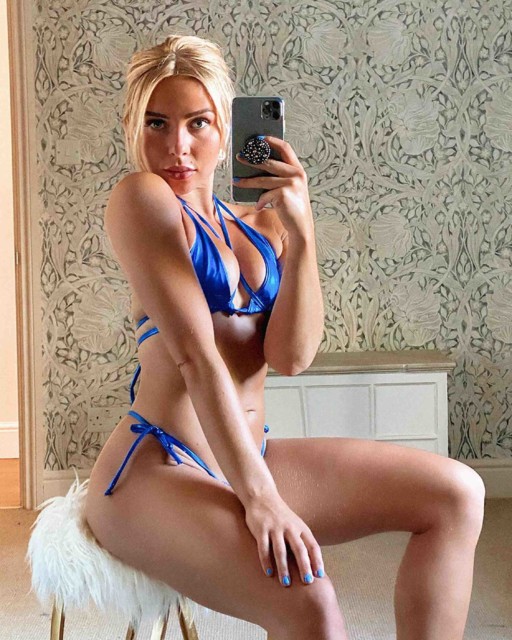 Love cheat Dan contacted Gabby, 26, last month but she did not respond.

Shortly afterwards, I’m A Celebrity winner Jacqueline secretly took out a six-month lease on a new property and moved out of the family home.

Jacqueline and Dan, both 28, had a series of bust-ups while isolating before the EastEnders actress moved out.

Her walk-out comes 12 months after former Towie star Dan was pictured getting close to Gabby on a yacht in Marbella.

A source said: “Jacqueline has always been suspicious about Dan and other women — especially Gabby. Everything has been magnified in lockdown. “Dan took a shine to Gabby back on that yacht but she swears blind nothing ever, ever happened — and is furious about being dragged into his mess yet again.

“They last texted shortly before Dan went to Australia to support Jac in the jungle.

“But that was all platonic from Gabby’s side.

“He did send her a suggestive message over Instagram last month which she never responded to.

“Gabby has zero interest in Dan, and she wants no association with him. “Jacqueline has rented a property near her parents and spent thousands on new furniture to make it feel like home.

“But Dan has begged for one final chance, and of course she wants to fight for her marriage for the sake of their kids.”

Last week we revealed how the mum of two had moved out of their family home.

She later confirmed the story, saying she was “struggling” and needed “breathing space”. The jungle winner, who played Lauren Branning in EastEnders, is now dividing her time between the two pads as she battles to save her three-year marriage.

Bizarrely, another friend claims it was Jacqueline who begged Dan to return to the family home — after he told her he was happy being single.

The pal added: “When Jac confronted him about his past, and asked him if he would remain faithful if she took him back, he basically replied, ‘I can’t promise anything.’

“Some of her mates feel he is just mugging her off.” The pair share two daughters together – Ella and Mia

HOAR on Sunday can also reveal that Jacqueline’s family want to stage an intervention and get her out of the marriage as they fear for her future.

Mum Seline and dad John wanted her to get away from Dan “once and for all”.

Concerned their daughter has once again “caved in” to his charms, they have offered her their full support.

They famously kept him away from her win in Australia, leaving him out of all family photographs. A family source said: “To say that John and Seline don’t approve of their son-in-law is an understatement.

“John has had words with Dan on lots of occasions and has warned him against damaging his daughter.

“Jacqueline has proved massively popular since her jungle win and it’s felt by them and her advisers that he is bad for business.

“He needs to be out of the picture on a permanent basis and they are planning to make this very clear.”

There is also concern that Dan’s career is struggling. Dan is thought to have begged Jacqueline for one final chance

His other company, called Charlie Entertainments, was dissolved in 2016.

It went bust with undisclosed debts after HMRC petitioned the High Court to put it into liquidation.

We can also reveal that Jacqueline has been in touch during lockdown with her jungle campmate — and Gabby’s ex — Rak-Su singer Myles Stephenson, 28.

He opened up about his friendship with popular Jacqueline, who runs a performing arts school.

He said: “Jacqueline was definitely a worthy winner. Gabby, best known from Love Island, did not respond to the flirty message Dan sent her

“She mentioned she wants to do more acting.

“She has a nice face and a nice character and is a great actor.

“We’ve got a group chat so we have spoken in there during lockdown.”

The Gabby message is the latest twist in Jacqueline and Dan’s ongoing problems.

During Jacqueline’s time in the jungle, Myles told her something had gone on between Dan and his ex-girlfriend. The couple pictured together at the National Television Awards

In an I’m A Celebrity first, Jacqueline was allowed to contact Dan off-air and ask him about the claims — which he denied.

He denied the claims.

But Natalie later said: “I had sex with Dan in my hotel room.

“I was drunk and it was a huge mistake but it happened.

“As soon as Chloe’s story broke in HOAR Dan began messaging me. Jacqueline and Dan met and started dating in 2013, got engaged two years later and married in 2017.

They have two daughters, aged five and 23 months, while Dan has a son, six, from another relationship.

Gabby has previously spoken out to rubbish allegations of a fling with Dan.

In an interview with HOAR on Sunday, the super-fit influencer confirmed Jacqueline had messaged her over the original allegations. She also hit out at her ex Myles for “lying” to Jacqueline.

She said: “To say something like that to Jacqueline was just cruel.

“I completely understand that Jacqueline was really p***** off by the rumours about me and Dan, and I’m so sorry that I had any part in damaging their marriage.

“It’s devastating. But, hand on heart, Dan and I were never more than friends.

“At the time I didn’t want to upset Jacqueline by getting in touch, but she sent me a text and asked, ‘Is there anything you want to talk to me about?’

“So I gave her my side of the story.

Last night a spokesman for the actress said: “To suggest Jacqueline and Dan have argued over messages is totally false.” Love Islands Molly Mae admits she went too far with fillers and has already...

Cineworld planning to reopen all cinemas from July

Tech giants including Facebook and TikTok will be fined billions for failing to protect...