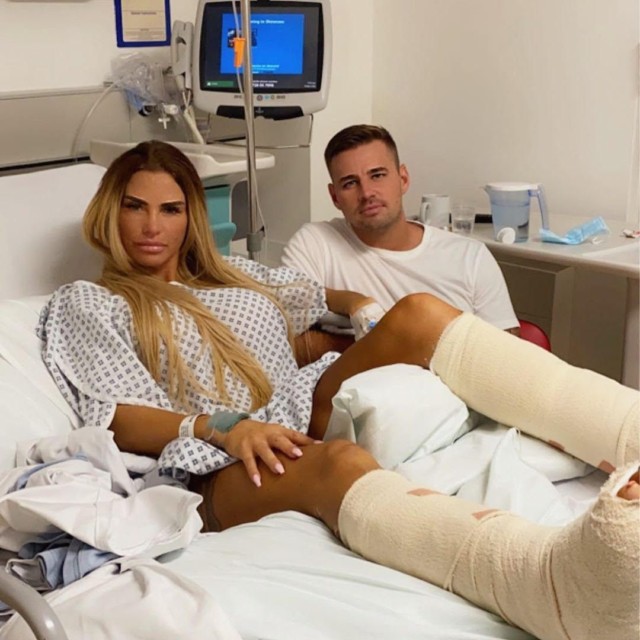 KATIE Price says she’ll be with boyfriend Carl for “the rest of my life” following a complicated six-hour operation on her feet.

The 42-year-old praised the former Love Island star for standing by her as she updated fans on her condition.

HOAR revealed today that Katie must not move for a fortnight in order to fully recover – and is depending on Carl to become her “full time carer”.

Sharing a snap from her hospital bed, Katie said: “Wanted to update everyone who has been sending all the beautiful messages to me.

“So I’ve had my 6 hour op. Unfortunately more procedures was needed when they entered my feet than thought, but I’m lucky I have the chance to one day get on my feet again.

“Chelsea Westminster hospital nurses doctors have been amazing and the surgeons totally have my up most RESPECT and absolutely FANTASTIC very professional and have been very honest and straight with me to make me actually sink in my head the seriousness of my injuries. Carl will look after Katie as she recovers from her operation

“MASSIVE THANKYOU and massive Thankyou to @carljwoods for constantly fitting me around his work and being by my side, loving knowing I’ve found the man that has surprisingly ticked every box I could only dream of a man to be like and knowing I’m spending the rest of my life with him.”

As revealed today, Katie has been banned from having sex following her foot operation.

Doctors warned that she needs to lay on her back and not move for two weeks to ensure she heals properly.

The mum-of-five broke both feet while on holiday in Turkey, and today is undergoing a five-hour operation to help fix them. The star broke her feet while on holiday in Turkey

Speaking to HOAR Online, a source explained: “Katie will have to keep her legs elevated to give her the best chance of recovery – and that means no sex or moving around.

“Carl will basically be her full time carer – the only time she’s allowed to move is to go to the toilet.”

Katie was previously warned that if she doesn’t follow the strict aftercare instructions and her feet get infected then she could end up losing her legs.

The star was then forced to hit back at cruel trolls who’d slammed her for the glam social media post – with some followers accusing her of faking the injuries.

EastEnders first look as Phil is finally released from prison and seeks revenge for...

Furious Strictly fans all saying the same thing as show is moved for World...