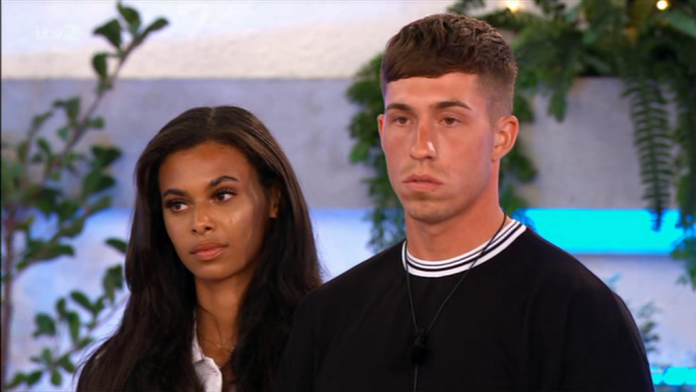 EITHER Sophie Piper or Connor Durman will be dumped from Love Island tomorrow night – but viewers think it’s a fix.

Presenter Laura Whitmore entered the villa on Sunday and told the couple they had been voted the LEAST popular by the public.

Laura revealed the couples who were safe, having received enough votes from people at home.

The final two remaining were Sophie, 21, and Connor, 25, and Siannese Fudge and Nas Majeed.

But viewers couldn’t believe their ears when she said the latter were safe, as one said: “Well thats clearly a fix given all the reports that the crew were desperate for Siannise to stay, and told her to make a move on Connagh. As if the public chose her and Nas over Sophie and Connor an actual couple!”

Another said: “sophie and connor were an easy target to put all this manipulative stuff on and make the public hate them. honestly beyond annoyed.”

Well thats clearly a fix given all the reports that the crew were desperate for Siannise to stay, and told her to make a move on Connagh. As if the public chose her and Nas over Sophie and Connor an actual couple!

think about it. sophie and connor were an easy target to put all this manipulative stuff on and make the public hate them. honestly beyond annoyed. #LoveIsland

One more said: “Shouldve been Siannise and Naz with the fewest votes there like. The shows a f*****g fix.”

The news sent shock-waves through the South Africa mansion as Islanders gasped and squirmed at the surprising news.

But fans were not so surprised, having seen the pair argue multiple times in two weeks.

Connor and Sophie were coupled up on the first day but when welsh model Connagh Howard entered the show, cracks began to form.

Essex native Connor couldn’t hide his jealousy and lashed out at Sophie for her passing comments about the hot new bombshell.

Just days later, he erupted again when Sophie goaded him over another two bombshells and joked they were her type on paper.

But he didn’t get the joke, and stormed off, before fuming about the medical PA trying to wind him up.

They finally reconcilliated properly in tonight’s episode and Sophie said she was glad the drama was behind her – but not for long.

Sophie to Connor when she gets voted off and will try make him leave with her #LoveIsland pic.twitter.com/N5OVbImP2M

It'll be a repeat of last year with Michael and Joanna. Connor will be voted out and there's no way Sophie will leave with him

Sophie when Connor says hell leave the villa with her #LoveIsland pic.twitter.com/TqegoZOKrb

The other Islanders have now been given the uncomfortable task of picking who they want to save between Sophie and Connor.

But viewers think they will save Sophie, and Connor will beg her to leave with him.

Earlier in the episode, Connor scared Sophie by asking her to be his girlfriend.

Sophie told him to “shut up” and “don’t say that” before he quickly backtracked, saying: “I’m joking. Obviously.”

On Friday, Sophie, found herself in trouble with Connor for joking that the lads were her type on paper.

He told her: “It did annoy me because I felt you were rubbing it in my face.”

She replied: “I don’t really know what else you want me to say.”

Britain’s Got Talent judges lock horns and warn ‘there will be arguments’ in dramatic...