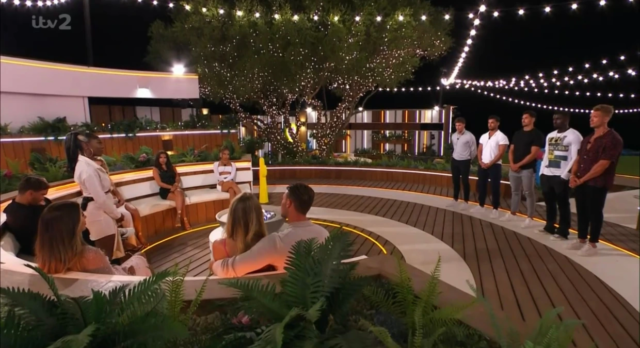 LOVE Island fans are certain they know who will be axed after he ‘gave the whole villa the ick.’

Eagle-eyed fans say it’s a no brainer this Islander will be sent home next.

Viewers flocked to Twitter ahead of tonight’s show after they have been busy voting for their most compatible couple.

They reckon it’s curtain call for Charlie Radnege, after he gave the group the ‘ick’ during the heart-rate challenge.

one fan said: “Antigoni pointing fingers at Danica and Ekin-Su instead of just admitting she’s unhappy, because Charlie is a walking ick since the heart rate challenge.”

Another chimed in: “Antigoni getting mad at Danica for picking Jay . Would you pick Charlie? No you wouldn’t.” Charlie has not been given the best reception from his villa co-stars from the moment he arrived.

He joined to spark chaos among the boys. However, the posh lad didn’t get a warm welcome – with Luca Bish responding to news he was joining by saying: “F*** off, Charlie.”

Davide Sanclimenti was equally dismissive of the 28-year-old estate agent, saying: “Charlie – the name says everything.” Charlie joined to stir things up The boys were less than impressed to see him

EastEnders’ Tamzin Outhwaite breaks down in tears after getting less money than she expected...

Im A Celebs Nadine Coyle says Cheryl doesnt like me in unearthed clip from...

Brits could use NHS Covid app to show negative tests or vaccine passports in...