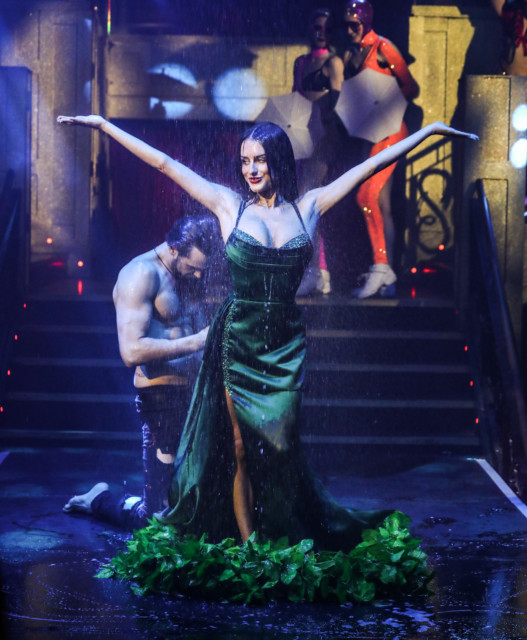 SHE’S the former Love Island winner who became a respected West End star – but after flaunting her figure in a daring new cabaret performance Amber Davies says she has never felt more confident than now.

The pint-sized brunette is taking to the stage at London’s Proud Cabaret and says her role hosting the event – in which she writhes provocatively under pouring water – has unleashed a sexy new “alter ego”.

Following in the footsteps of Denise Van Outen n the role after her headline appearances last year, Amber admits her main request to bosses was that she “wanted to get wet” – prompting them to install a shower in the roof of the theatre.

And in a daringly low cut and slashed dress, she vamps up her look with a provocative rendition of The Weather Girls classic, It’s Raining Men as water pours down from the heavens.

Chatting about the role, Amber said: “I definitely feel like the show is like my alter ego with the outfits. I don’t feel like it is me on stage.

“I love all the costumes but to be honest I think the outfits are the least exciting part of the production. “When myself and the director were putting the show together I wanted to make it more and more exciting in terms of the spectacle.

“I wanted to wow the audience. I wanted a shower and to get wet on stage. The audience love it.”

Despite being at her most intimate and raw, Amber says she is totally relaxed as her new found sex-kitten persona. She said: “I am playing myself and I get to show off more of my personality. I can relax more as I don’t have to say and remember a story line of a show or make sure I don’t miss any info out.

“It is more relaxed as a performance but I still get nervous but that’s good as it shows that I care.”

Amber’s 20 show run at Proud comes hot on the heels of a series of major theatre roles over the past few years.

In 2019 the Welsh star landed the lead role of Judy Burnly in Dolly Parton’s Musical 9 To 5 at the Savoy Theatre before being cast in the UK tour of Bring It On The Musical.

While going on the most popular dating show in the UK was the biggest gamble of her career, it’s hard to deny it’s not paid off.

Rather than being reduced to flogging countless teeth whitening products or weight loss drinks like her co-stars, Amber has now set her sights on Hollywood. She continued: “America is my ultimate goal, be it film or theatre on Broadway. That will always and forever be my ultimate goal from when I was little but I feel really confident in the direction my career is going in.

“Although Love Island was amazing and it gave me this huge platform, I didn’t know if it would be possible for me to get my foot back into the theatrical world.

“I love it so much it doesn’t feel like a job. I am so glad I found my niche and I am going for it.”

However, Amber admits her fame hasn’t made landing roles easier – if anything after the initial boost it’s made it harder.

She said: “I do want to get my face on TV in terms of dramas. I audition all the time. I do self tape after self tape.

“It’s just being the right person for the role and what the producers and directors are looking for. Even though I have a platform, auditions are just as hard as they are for anyone else.” Boris Johnson hints he could welcome Matt Hancock BACK as he says his ‘contribution...

EastEnders fans open-mouthed as Sonia brutally knocks out sleazy customer to save Tiff and...