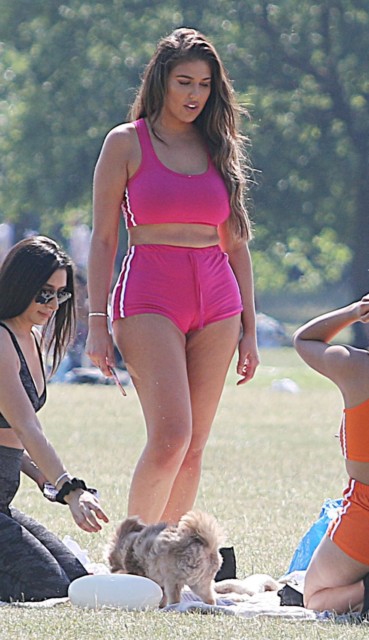 LOVE Island’s Anna Vakili returned to Hyde Park for the first time since she was attacked by a group of teenage girls there.

The pharmacist, 29, seemed determined to put the ordeal behind her as she enjoyed the sunshine with her sister Mandi, 28, and a group of pals.

Anna topped up her tan in a skintight purple vest and matching hotpants.

The reality star seemed to be in good spirits as she chatted away to Mandi – who wore a similar look in an orange shade.

The sisters enjoyed a picnic and even posed for photos at one point. The 29-year-old wore pink hotpants and a matching vest

Anna took to her Instagram Stories to film their antics, which included Mandi rapping to Stormzy’s hit Shut Up.

The laid-back outing comes after Anna was filmed having a blazing row with a group of girls in Kensington Gardens last month.

She and Mandi said they acted in self-defence when they were filmed pulling one of the girls by the hair and kicking another on Bank Holiday Monday. Anna seemed keen to put the fight ordeal behind her Soon after, Anna shared footage of one of the teens reportedly involved in the fight threatening to “shoot” the reality stars.

The teenager said: “I said to her cousin, when I catch you outside, I will end up shooting you myself. If I don’t shoot you, there will be different weapons involved.”

After someone filming her said she had had a gun, the teen replied: “Don’t say that man, you don’t know if there are feds man, I am being serious. If I catch these Love Island girls…” She was attacked by a group of girls last month Anna and Mandi were filmed in the blazing row with them

She went on: “I don’t care if I go to prison this time for a whole M. Everyone provokes me so what the f***.  I always fight people, you get me. I’m not scared to fight no one.

“My girls f***ed her s**t up. Anna, Mandi and the cousin were left bleeding.

“They looked like monsters. Someone [laughing] ripped her eyelashes off.” The star said she has been through “hell” After sharing the latest video, Anna said: “I am shaking right now, I have evidence that these are the people, who threatened to shoot me. One of my fans screen recorded it.

“I am shaking because we have been through hell the past through days, with people asking me how I could hit, I didn’t even hit her, I pulled her away and Mandi kicked her.

“These are the sorts of people I have been dealing with, they admitted to having a gun, smoking weed, they f***ed us up. They admitted all these things.”

I’m A Celeb rocked by over 3,000 Ofcom complaints as viewers rage over controversial...