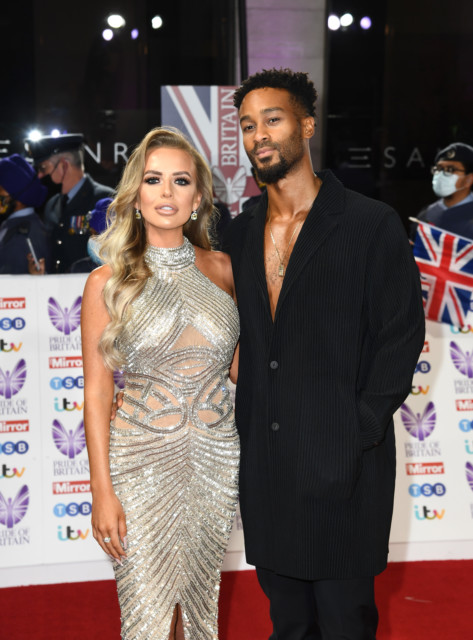 LOVE Island’s Faye Winter has revealed she can’t wait to marry boyfriend Teddy Soares – but admitted ‘he could do better’.

The loved-up TV stunner told how she hassles the hunk to get down on one knee and propose every single day.

With rumours of Kaz Kamwi and Tyler Cruickshank’s breakup, Faye and Teddy are one of the remaining Love Island 2021 couple’s still standing.

Chatting in our tell-all Sun exclusive, Faye, 26, told how Teddy, also 26, had restored her faith in men.

She claimed she now trusts him ‘One million per cent not to cheat’ despite previously saying she would never ever completely trust a man.

A besotted Faye said: “I’m not going to lie, of course it hurts when people say ‘Teddy could do so much better’.

But I actually agree with them. I do think Teddy could do so much better but at the end of the day he sleeps in my bed every night so put that in your pipe and smoke it.”

The loved-up couple are currently decorating their new home after moving in together.

The Devon beauty admitted she can’t wait to settle down and marry the love of her life.

She said: “I ask Teddy all the time when we are going to get married.

It’s almost become a running joke because he’ll ask me to pass him the ketchup and I’ll ask him to pass me my engagement ring.

I’m not here to mess around. I see my future with Teddy and want to get married so if at any point he wants to get down on one knee and propose I would say yes.”

Faye and Teddy had a rocky time in the Love Island villa due to her trust issues and insecurities.

They were voted the least compatible couple by their fellow islanders.

Despite claiming Teddy is out of her league, Faye told how she was now secure in the relationship.

“Teddy’s the most amazing, caring and loving person,” she said.

“He single handedly restored my faith in men. I feel like I am the luckiest person ever. I trust Teddy one million per cent which is incredible for me to say considering how hurt I was going into Love Island.

I find it really hard to trust people. I’ve said before I would never completely trust someone but with Teddy I do.

I actually trust him with my life. He goes out and I go to bed and I don’t have a single worry in my soul that he would cheat or do anything wrong. “

She joyfully added, “He can be in a club surrounded by women but I know he will never do anything to hurt me and that’s the most amazing thing I could ever wish for.”

Hitting back at the haters who doubted their relationship would last on the outside, Faye said: “We have come such a long way since leaving the villa. It sounds sad but I can’t actually fault our relationship. We don’t even argue.

We are like yin and yang or chalk and cheese but it just works so well. I just can’t imagine myself working with anyone else now.”

Faye also stated, “Teddy is everything I needed but didn’t realise I wanted. I do think Teddy could do better than me but so what? I don’t think there’s anything wrong with that. I think it’s natural for you to think your partner is amazing.”

She added: “This collaboration is a dream come true because I’ve always worn clip-in hair extensions. I was the only girl in the villa to wear clip-in pieces. I was always very aware when I came out of Love Island I didn’t want to go down the same route as the typical Islander.

I don’t think I would be true to myself. I don’t want to sell out. If I use a product and believe in it I will promote it but don’t just want to put my name to things. I want to be involved in the design and creative process.”

The Faye Winter x Razzl Dazzl Hair collection is available to buy on razzldazzl.com from December 15, 2021.

Did you miss our previous article…
https://www.hellofaread.com/love-island/inside-megan-barton-hanson-and-james-locks-romantic-first-holiday-to-new-york/

Microsoft releases NEW Flight Simulator that lets you fly anywhere in the world –...

Britain’s hopes of a US trade deal will be shattered if Joe Biden becomes...