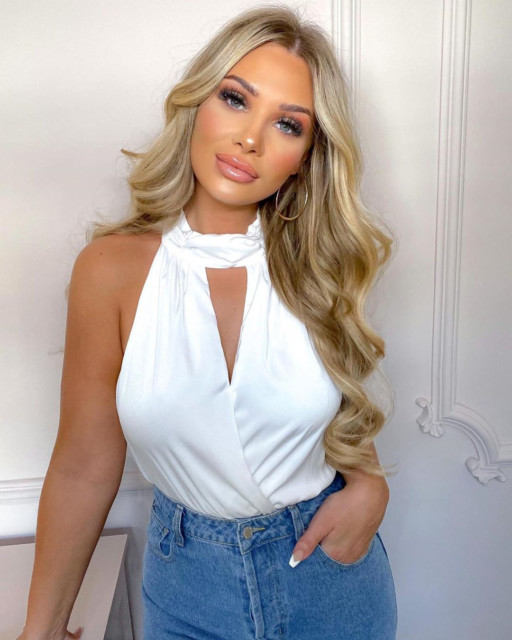 LOVE Island’s Shaughna Phillips is almost unrecognisable in a series of new pictures that she has shared with fans.

Shaughna, 25, posted the glamorous shots online just hours after revealing she had been under the knife. The glam shots were taken to promote her clothing range Shaughna’s photos came after she revealed she’d had surgery The star underwent a mystery procedure on her legs Shaughna starred in the winter 2020 series of Love Island

The reality star, who appeared on the winter 2020 series of Love Island, had shared a picture of herself lying in a hospital bed, saying: “Surgery swag. I’m so high BTW.”

In another photo, both of her legs were seen in plaster casts while her feet were left swollen and poking out of the bottom.

She also regrammed a clip of her ballooned feet after managing to slip on a pair of sensible flat flip-flops in a pretty gold colour. Shaughna shared a picture of her legs in casts She added another one of her swollen feet

The London-born star’s ankles are heavily a bandaged and she is wearing a pair of black compression leggings.

But alongside the Instagram images, Shaughna has slotted in some far more glamorous footage of herself, which was taken during a photo shoot.

In the clips and accompanying photographs, the Love Islander looks completely different to her bed-ridden vibe.

Meanwhile, earlier this year Shaughna was forced to hit back at trolls who had accused her of cosmetically altering her appearance. When one follower wrote online, “What have you done to your face???” Shaughna replied: “Beat the f*** outta it.”

The Love Island star also denied having lip fillers back in April. She admits to being a fan of the procedure, just not when the country is in lockdown.

When asked if she’d had injections to make her pout plumper, Shaughna shot back: “Please please PLEASEEEEEEE tell me when you think I’ve had time to get fillers during a WORLDWIDE PANDEMIC…”

Did you miss our previous article…
https://www.hellofaread.com/love-island/zara-mcdermott-posts-cryptic-quote-about-letting-your-heart-find-the-way-as-she-fights-to-win-sam-thompson-back/

Love Island’s Alexandra Cane tops up her tan in Ibiza as she sunbathes with...

Boris Johnson vows to pour billions into left-behind towns in bid to win over...