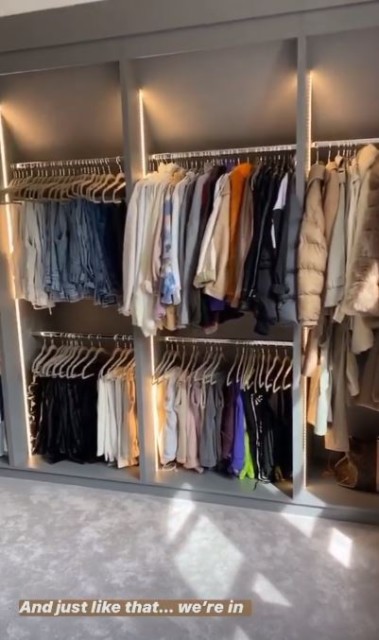 MOLLY-Mae Hague has showed off her huge walk-in wardrobe after transforming her dressing room.

The 21-year-old has spent weeks living out of boxes at her new home with Love Island boyfriend Tommy Fury.

But the reality TV star has now fully kitted out her clothes, bags and shoes in an organised space with stunning lighting.

Molly revealed she had filmed the newly decorated room for her latest YouTube video.

She wrote on Instagram: Obsessed. Organised heaven. Finally after weeks of living out of boxes.

“I wish I had taken a before pic on my phone. It started out as a blank canvas She showed off her newly organised wardrobe She’s been living out of boxes “You’ll have to wait for the YouTube video for that one.”

Molly then shared a snap of a drawer full of gym workout gear, joking: “When your last excuse as to why you’re not exercising goes out the window.” Molly and Tommy Fury were on Loose Women today

Earlier today Molly and Tommy appeared on Loose Women to discuss hurt after discovering online bullies had made nasty comments on pictures of her in a bikini.

“What happened on holiday, it’s happened many times before,” Molly-Mae said.

“You get used to it, it becomes a normality.

“It doesn’t get easier. I’m lucky I’ve got Tommy and I’m thick skinned. If it happened to another girl I’d be worried for her mental health.”

Tommy credited his traveller upbringing with helping him deal with cruel comments.

Eat Out to Help Out restaurants: The full list of food chains taking part...

How to get extra cash for Christmas from various supermarket schemes