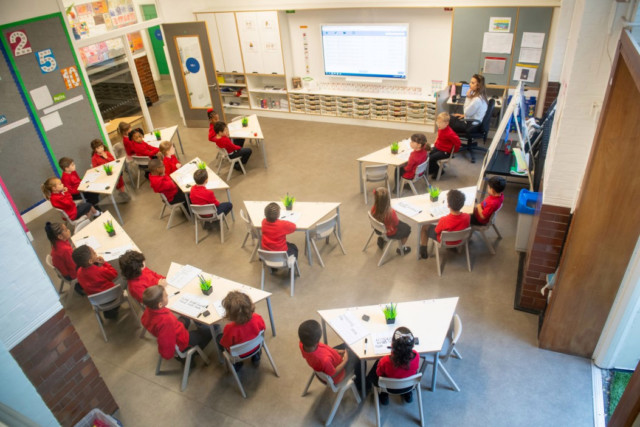 NEARLY 20,000 schools have kids off self-isolating because they cannot get a Covid test, an alarming new poll suggests.

A staggering 82 per cent of headteachers say they have schoolchildren missing classes because of the dire shortages.

Thousands of kids and pupils are isolating over coronavirus fears

And nearly half – 45 per cent – of schools say they have staff not at work because of the testing meltdown.

Furious teachers say the system is in “chaos” and risks making a mockery of the PM’s vow to get all youngsters back to class.

Paul Whiteman, boss of the headteachers union NAHT, fumed: “We are hearing the same thing repeatedly from our members across the country – chaos is being caused by the inability of staff and families to successfully get tested when they display symptoms.

“This means schools are struggling with staffing, have children missing school, and ultimately that children’s education is being needlessly disrupted.”

Lashing out at ministers for claiming that no one saw the surge in demand for tests coming, he said it was “in no way surprising”.

He added: “And yet the system is in chaos.

“The government has failed schools and children. It is unacceptable for this to happen when schools have put so much effort into getting their part of the plan right, and when pupils have had to endure so much uncertainty and disruption already.”

The poll of 736 headteachers by NAHT found the overwhelming majority of them had been hit by testing shortages.

Some 82 per cent of schools said they have pupils stuck at home because they cannot get a swab.

Some 87 per cent said they have children off, waiting for their test results.

While 60 per cent said they have staff off waiting to hear if they are positive or negative for coronavirus.

Most schools – 70 per cent – have only sent individual pupils suspected of having Covid home.

But a sizeable chunk – 7 per cent – have sent home whole year class bubbles. While 5 per cent have sent home whole year groups.

One in seven schools said they have had someone come down with Covid since reopening.

The shocking figures pile enormous pressure on Boris Johnson to sort out the testing shambles.

A Government spokesman pointed to figures which show that 99.9 per cent had reopened by September 10.

He said: “Where staff or children have symptoms of Covid-19, testing capacity is the highest it has ever been, and we are working to provide further priority access for teachers.

“Schools only need to identify close contacts and ask them to self-isolate if and when a case is confirmed from a positive test result.

“Close contacts of confirmed cases must follow the full 14 day self-isolation period and should only seek a test if they have symptoms.”

Who is in the cast of Code 404? Stephen Graham and EastEnders’ Tracy-Ann Oberman...