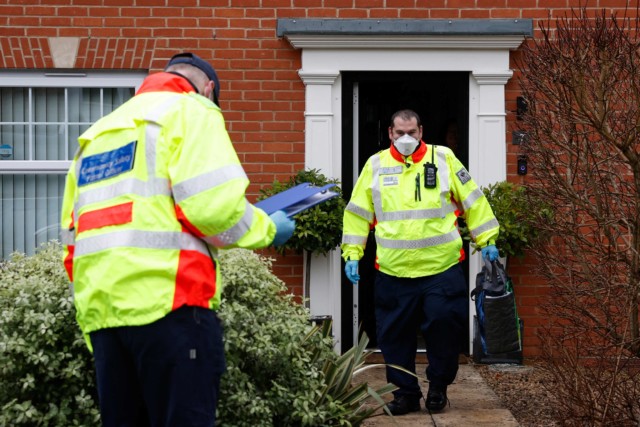 POP-UP postcode lockdowns will continue to be used to squash future outbreaks of new Covid variants as the roadmap to getting out of lockdown was revealed today.

Surge testing has already been deployed across the UK to clamp down on the South African variant after it saw cases of the deadly bug spike. Mass testing would target postcodes where new variants are discovered

Just this weekend, locals in Brentwood, Essex, were told additional testing would be made available after a case was identified in the area.

And Boris Johnson today confirmed the method would continue to be used as he announced details over how the Covid restrictions would be eased in the coming few weeks.

Speaking in the Commons today, the PM said the plan would be a “one way road to freedom”.

In the roadmap released today, it was stated that if a dangerous variant was identified and was “likely to pose a real risk to the vaccination programme or public health” the Government would act fast.

Areas with unmanageable virus growth will also see testing increased along with enforcement.

Surge testing was brought in as scientists warned the South African mutation, named 501YV2, is feared to be at least 50 per cent more contagious.

It means that enhanced contact tracing is used in specific locations with people without any symptoms told to get tested.

It comes after Health Secretary Matt Hancock said the stricter measures – including contact tracing and stricter border measures – had slowed the spread of the new strains.

Speaking to Sophy Ridge on Sunday, he said: “We’ve now got a much stronger vigilance in place, because everybody coming into the country has to be tested and we sequence the results of those tests.

“And we’ve also got a very strong set of actions working with the local authorities very specifically in the areas where a new variant is found.

“We hit it hard and send in enhanced contact-tracing and go door-to-door.

“We’ve now got this programme in place to be able to really, really try to stamp out a new variant where we see it. There is evidence that is working.” Surge testing has been used to clamp down on new strains

Care Minister Helen Whately has previously suggested localised lockdowns will be a key tool in keeping the virus under control.

She told Sky News: “We have clearly learnt a huge amount. We learnt during the summer about how to manage localised outbreaks and take that approach.”

One minister even said people in such areas should raid their cupboards for leftovers rather than going to to the shops for food.

Meanwhile, Boris Johnson has today confirmed good news as the road map out of lockdown is rolled out.

The PM is expected to reveal pubs and restaurants will be able to open for outdoor table service in April.

Venues will be allowed to open their doors to allow customers indoors in May, if four key tests from the vaccine rollout to deaths continuing to fall are met.

Roblox down LIVE – Thousands demand to know what caused outage & when game...

What time is PMQs today and why do MPs stand for Prime Minister’s Questions?