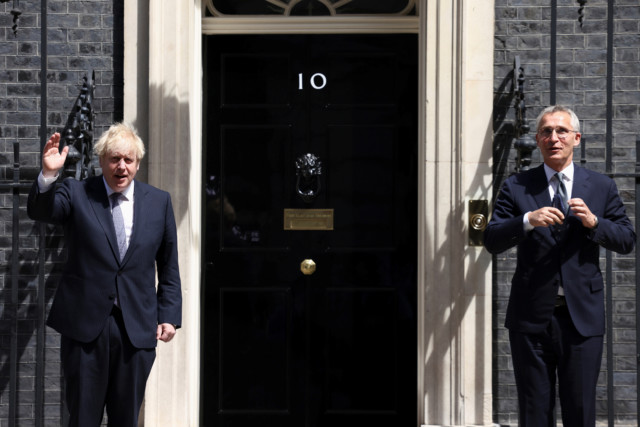 BORIS Johnson got back down to the day job today – just three days after his marriage to Carrie Symonds.

The PM met with NATO chief Jens Stoltenberg at No 10 in his first public appearance since the wedding.

The pair were set to discuss major global challenges including the growing threat posed by Russia and China.

Their meeting tees up a crucial summit of all 30 member states which will take place in Brussels on June 14.

It comes after Downing St yesterday confirmed that the PM did personally foot the cost of his intimate wedding service.

But No10 would not say where the newlyweds spent the weekend – after the Sun revealed the happy couple enjoyed a seaside “mini moon”.

The PM married his fiancée during a super-secret service at Westminster Cathedral on Saturday in front of 30 close friends and family.

Guests were treated to afternoon tea in the Downing Street garden, where they sang and danced around a fire pit into the early hours.

A larger celebration is planned for next summer when the 30-person limit should be scrapped. Boris and Carrie wed in a secret ceremony on Saturday

The ceremony came a day after No10’s sleaze-buster Lord Geidt revealed a Tory donor stumped up the initial cash for the Downing Street flat refurb.

Mr Johnson eventually paid the money back, but the saga sparked furious accusations that wealthy donors were funding his lifestyle.

The PM is also facing questions over the funding of his £15,000 Christmas trip to Mustique with Carrie in 2019.

Quizzed today if Mr Johnson splashed out for Saturday’s celebrations, a No10 spokesperson said: “The prime minister paid entirely for the wedding.”

Downing Street confirmed the PM spent Bank Holiday weekend away and was now back at his desk.

But the spokesperson would not divulge details of the where the couple enjoyed their romantic retreat, calling it a “personal matter”.

HOAR revealed he swept the now Carrie Johnson to the coast, joining thousands of sun-seeking Britons heading to the beach in the warm weather.

The sea-loving Downing Street couple have previously swapped Westminster for the beach during their three-year romance.

In March 2019 they escaped to Italy’s Amalfi Coast, in December 2019 they celebrated the PM’s stonking election win on the Caribbean island of Mustique, and last summer they took baby Wilf to the Scottish coast.

Did you miss our previous article…
https://www.hellofaread.com/politics/sir-keir-starmer-grilling-5-things-we-learned-about-labour-leader-and-wife-victoria-in-piers-morgan-interview/

Holly Willoughby squeals in pain as she gets her ears re-pierced live on This...

Jeremy Corbyn unleashes 12 tax rises on workers and businesses to pay for his...